Here is the video of Donnie on Jimmy Fallon:

Youtube video courtesy of yikes 77
Posted by NKOTB News at 5:42 AM No comments:

Donnie to be on the Jimmy Fallon show next Wednesday

Donnie will be on Jimmy Fallon next Wednesday night.
Posted by NKOTB News at 9:36 PM No comments:

Donnie talks all things Boston Red Sox and New Kids on the Block on WFAN's Boomer and Carton:

Posted by NKOTB News at 9:34 PM No comments:

Here are some articles on Mass. Eye and Ear Benefit & Blue Bloods

Youtube video courtesy of yikes77
Posted by NKOTB News at 7:32 PM No comments: 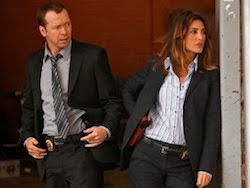 Donnie Talks Blue Bloods And This Week's Episode on Television Blend: Click here for interview
Posted by NKOTB News at 5:34 AM No comments: 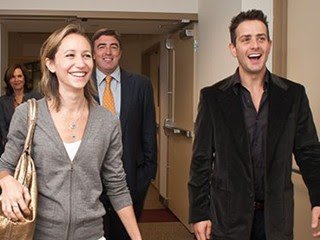 Joey and Barrett did some interviews for Boston media. Click on links below:

Joey McIntyre Teams Up With Local Hospital To Help Children - Video & article from TheBostonChannel.com: Click Here.
Posted by NKOTB News at 5:31 AM No comments:

Donnie is also lending his support to the Ford Warriors in Pink for a breast cancer awareness campaign
Posted by NKOTB News at 8:50 AM No comments:

Here's an article from Boston.com. Thanks to Mary for the link. 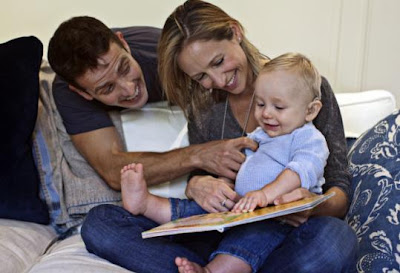 A song of hope, dedicated to his son
Joey McIntyre now an advocate for deaf
By Mark Shanahan, Globe Staff | October 9, 2010

Joey McIntyre and his wife, Barrett, were in an office at UCLA Medical Center when a grim-faced technician walked in with the results of their son’s hearing test and told them that 10-day-old Rhys Edward McIntyre had severe hearing loss.

“She started talking about sign language and schools for the deaf,’’ said McIntyre, a member of the Boston-bred boy band New Kids on the Block who has been singing on stage since the third grade. “We were like, ‘Huh?’ We just wanted to get out of there and go home.’’

The irony of having a baby who might never hear him sing didn’t register right away with McIntyre. Instead, he and his wife were in shock, overwhelmed by what they didn’t know and their son’s prospects for a normal life.

Nine months later, that is changing. The couple understands that a diagnosis of deafness is not a disaster, and they’re learning about treatment options, which have improved greatly over the past 25 years. McIntyre and his wife have also made a commitment to help others facing the same uncertain future. The singer will be at a gala in New York for The Center for Hearing and Communication, and New Kids on the Block are performing Wednesday at a fund-raiser for Massachusetts Eye and Ear, which developed the test used to screen infants — including Rhys — for hearing loss. McIntyre says it is just the beginning of his efforts for the cause.

The invitation was extended by Wyc Grousbeck, the Celtics CEO who is chairman of the Mass. Eye and Ear board of directors. The father of a student at Perkins School for the Blind, Grousbeck has devoted years — and millions of dollars — to research related to blindness. He knows what McIntyre and his wife are grappling with, but he also knows there is reason for hope.

“My son is 17, plays in a rock band, studies physics, and has a girlfriend. He’s amazing,’’ said Grousbeck. “I’m sure Joey and I will be talking father to father.’’

Advocate is a new role for McIntyre but one he’s well suited to: He knows how to get people’s attention.

With eight older siblings, he was rarely without an audience as a child growing up in Jamaica Plain. Encouraged by his mother, Katherine, he made his musical theater debut at the age of 8, singing “Gary, Indiana’’ from “The Music Man’’ at the Footlight Club in JP.

“When Joseph finished his little song, the audience wouldn’t stop clapping,’’ said his sister Carol Gallagher, who has performed at the venerable Footlight for years.

Less than a decade later, McIntyre was in New Kids on the Block, the youngest of five pinups who performed to stadiums of screaming girls. Between 1988 and 1994, the teen sensations — forbearers of Backstreet Boys, ‘N Sync, and 98 Degrees — sold more than 35 million records and even more tchotchkes, from beach towels to marbles.

Life after NKOTB included stints on and off-Broadway, TV appearances on “Boston Public’’ and “Dancing with the Stars,’’ a couple of movies, six solo CDs, and, in 2003, a wedding. McIntyre met his wife — a Princeton graduate who moved to Los Angeles with a vague plan of becoming a producer — while she was working as a real estate agent.

“Joe was my first client. They told me he was in New Kids on the Block, so I thought he was going to be, like, ‘Yo, let’s find a crib,’ ’’ said Barrett, laughing. “He wasn’t. Joe is really smart and funny and sweet, but he wasn’t my type. I kept telling my mom he’s the nicest guy. I knew if I didn’t go for it, I’d regret it.’’

The couple’s first child, Griffin, was born healthy three years ago. Then came Rhys. The results of a hearing test done the day after he was born raised red flags, so more tests were ordered. Last December, two days before Christmas, the couple was summoned to UCLA Medical Center.

“It was awful. I’ll go right out and say it,’’ Barrett said. “I was caught up in ‘What happened?’ I’d made him. He was in my belly. I was looking for reasons.’’

The couple didn’t tell their families immediately, taking a few days to digest the news. They quickly discovered that Rhys’s condition isn’t that uncommon — about 1 in 1,000 babies are born with hearing loss — and advances in technology have made it possible for even severely impaired children to hear. Cochlear implants, for example, a surgically implanted electronic device, can help profoundly deaf people to perceive sound.

“I think Joseph and Barrett realized, in the scheme of things, it could be much worse,’’ said Gallagher, McIntyre’s sister. “We also joked that our family is so loud it might not be an issue at all.’’

Because his hearing loss was detected early, Rhys began working with an audio verbal therapist when he was 2 months old. Today he has hearing aids and is making progress. Cochlear implants are an option but may not be necessary.

“What I do is guide and teach parents so they’re doing what they need to do with their child 24/7,’’ said Rhys’s therapist, Sylvia Rotfleisch. “His parents are proactive and delightful. They’re down on the floor playing with their son and they adore him. He’s making lovely, age-appropriate progress, and that’s very exciting.’’

McIntyre said it’s not easy raising a child with hearing loss, but it isn’t a tragedy either. He and his wife have a dance party at home every night, and Rhys is right there, moving to the music with his older brother.

“He’s the cutest, chubbiest 9-month-old baby you’ll ever see, the greatest kid in the world,’’ McIntyre said. “It’s, like, the more you know, the easier this becomes.’’

That’s why he’s happy to be speaking and performing at Wednesday’s event for Mass. Eye and Ear, the 186-year-old hospital and world-renowned research center. The sold-out event at the Renaissance Boston Waterfront Hotel is a fund-raiser for Mass. Eye and Ear’s new Cures for Kids Fund.

“Frankly, we have our hands full at the moment,’’ McIntyre said. “But look at Wyc [Grousbeck]. When your children are born with this kind of challenge, everything else is out the window.’’
Posted by NKOTB News at 8:49 AM 1 comment:

NKOTB News Blog is now on Instagram
For breaking news follow "NKOTB News" on social media: Twitter  |  Facebook  |  Instagram
NKOTB to appear on The Kelly Clarkson Show
Airdate TBD! Hopefully they will talk about the rumors about new music and Mixtape Tour 2022
Behind the Music with NKOTB
A new "Behind the Music" special with NKOTB is now airing on Paramount Plus!
The Wood Works
Check out Danny Wood's new YouTube series The Wood Works. Episodes post every Tuesday!
Farmhouse Fixer
Jonathan's show "Farmhouse Fixer" is now airing on HGTV and Discovery Plus!