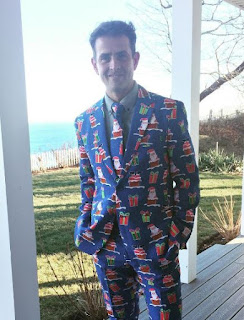 ET Online posted an article about Jonathan and Harley's engagement and how Jonathan wants his wedding day to go.

Fresh from his 21-day African adventure, Jonathan Knight has dished to ET about his upcoming wedding and the scary moment he knew he had to propose.

The New Kids on the Block singer had been checking out wedding rings for more than four years, but it was watching his longtime love, fitness trainer Harley Rodriguez, dangle over a death-defying waterfall that prompted the star to finally pop the question.

"We were walking around Victoria Falls, and there's this thing called Devil's Pools," says Knight, who was holidaying in Africa with Rodriguez, their mothers and friends. "It's ridiculous -- you walk to the edge of a waterfall and then it drops straight down and it just didn't make any sense to me, so I didn't do it, but Harley did. In the back of my mind I'm like, 'If he's hanging off a waterfall, I could frickin' lose him! It's time to do it.'"

Returning to their rustic lodge, Knight got ready with the classic gold bands he had been carrying around with him. However, the 43-year-old Rodriguez and their moms were exhausted, and decided to skip dinner and have an early night. Initially "freaking out," he halted his plan and instead popped the question the following day as the group dined on a raft in the middle of the Zambezi River. Once again, the deadly drop of Victoria Falls was nearby, along with dangerous wildlife.

"There were alligators and hippopotamuses and they had to have people watching out to make sure hippopotamuses didn't come right up to the raft," says Knight, 48. "We started eating dinner and our moms were like, 'Oh my goodness, this is the most memorable trip ever!' At the back of my mind, I was thinking, 'Just wait… it's about to get a whole lot more memorable!'"

"Then we were talking to our mothers, toasting cool life things that were coming up and I went, 'Well, I have another pretty cool life event coming up.' Harley looked at me and was like, 'What? What are you talking about?'"

"He totally didn't expect it. He was shocked. But it was an immediate 'Yes!'" says Knight, adding that despite knowing he wouldn't be turned down, he was full of nerves buying the ring and asking the question. "I guess I was pacing a lot and just acting different because afterward my mother was like, 'I knew this was going to happen tonight! You were acting really different and nervous!'"

Knight says it was extremely special to have their moms -- who had never met before the vacation -- present for the big moment, but confesses he was initially anxious about having their parents meet and get to know each other during a three-week overseas trip.

"I was nervous about that, but within 10 minutes of them meeting, it was special and so cute watching my mother and his mother walking around, talking, sharing their life experiences and beaming with joy. Our moms have never gotten to see Harley and I in our day-to-day routine, so 21 days of that was pretty cool for them. And how special is it to have your moms there when you ask for somebody's hand in marriage?"

Knight and Rodriguez met during NKOTB's 2008 reunion, while the singer was attending Rodriguez's classes at Barry's Bootcamp in between tour rehearsals. They have since competed together in the 26th season of The Amazing Race.

Two days before flying to Africa, Knight told some of his five siblings about his proposal plan -- "They're like, 'About time!'" His thrilled bandmates have since been telling him he's not allowed to elope, but with the group heading out on The Total Package Tour with Boyz II Men and Paula Abdul next May, the couple have yet to set a date and the ceremony is unlikely to be a giant spectacle.

"I prefer small, intimate weddings where you can just be with family and friends, appreciate everybody who's there and not get lost in the whirlwind," he says. "I hear so many people talk about their weddings and say they don't remember half of it. It's such a special moment in your life that I think you should make it something you can look back on and remember every intimate detail of who was there and what was said."

"My dream wedding would be in a field with tables, candelabras and live chickens running underneath the tables," he adds. "Harley's mortified about that idea. He said the chickens are going to be pecking at all of the guests’ feet and freak people out!"

He's confident that Republican Donald Trump's recent presidential win won't affect that law, but admits he was "grateful" to have been abroad during the election.

"I am so worried about the future of our country. You look at the people that Donald Trump is appointing to his cabinet and so many of them are anti-LGBT. But there's also a part of me that believes the majority of America is behind gay rights, gay marriage and equality. We may have to go back a bit and fight a little more, but I don't think that's going to change."
Posted by NKOTB News at 12:34 PM No comments:

Watch behind the scenes video of NKOTB on Fuller House

Here is a video clip with interviews with NKOTB members and Fuller House cast members about the NKOTB episode.

Here is another clip of NKOTB's appearance on the Today Show from last month where they participate in a segment about etiquette while flying.

Listen to a clip of a new song by NKOTB

Donnie shared this clip on his Instagram of him and Jordan in the studio making new music. Check it out below:

Just a little sample of me and @jordanknightofficial in the kitchen! #NKOTBNewness
A video posted by DONNIE WAHLBERG (@donniewahlberg) on Dec 7, 2016 at 9:36pm PST

Posted by NKOTB News at 7:39 AM No comments:

Donnie and Paul shared a virtual reality video clip for Wahlburgers. Watch the video clip below:

NKOTB has added 4 more dates to the Total Package Tour! Tickets go onsale Friday, December 9 at 10am local time and pre-sales and VIPs tickets start tomorrow at nkotb.com. (Tickets for the FL date go on sale 12/15 and VIP presale starts 12/12).

NKOTB 2020 cruise Postponed
Due to public health concerns and travel restrictions, the cruise has been postponed to a date TBD.
NKOTB to play Fenway
The guys will only be doing one show this year and it'll be September 19th at Fenway Park in Boston!