Watch Donne Wahlberg on Live! with Kelly and Michael

Donnie was on Live! with Kelly and Michael yesterday. He talked about who his mom and dad's favorites are, living in Illinois, tattoos, how much sleep he gets, Blue Bloods and more.


Video courtesy of Isidra Overmyer
Posted by NKOTB News at 10:27 AM No comments:

The New Kids will be making an appearance at this year's Mixtape Festival in Hershey, PA on August 6. Here are some more details from nkotb.com:

Blockheads! We miss you. We wanted to let you know that after many unbelievable years of tours around the globe, we have decided to take a break from touring during 2016.
We are always planning big things for the future and we are looking forward to being together again soon.
But….we have some news as promised. We were offered the opportunity to return to the Mixtape Festival in Hershey, Pennsylvania and after talking it over we decided it’s the perfect excuse to spend a weekend with all of you and to make this break from the road just a bit more fun for all of us. Mixtape has always been near and dear to our hearts (and yours too!) and we couldn’t miss out on it. We’ve gotten a glimpse of this year’s line-up of superstar artists and TRUST us you will want to be there to see some very special moments.
We’re going to make Mixtape Festival an event full of face time with you.
In addition to our headline set at the Festival, we will have a BLOCKNATION Pre-Party on Friday, August 5th as well as an Afterparty immediately following the Festival. Read below for specifics and stay tuned for the Full Festival lineup announcement very soon. SEE YOU IN HERSHEY!!!!
Mixtape Festival – Hershey, PA – Saturday August 6th
Saturday April 23rd – BLOCK NATION Pre-Sale (Starting @ 10am EST)

BLOCK NATION Mixtape Pre-party
We’re going to have a BLOCKHEADS only pre-party on Friday August 5th. If you’re a member of BLOCK NATION, you’ll have the opportunity to hang with the guys the night before Mixtape at Hersheypark Stadium. FOR FREE!!!!
Once Tickets have gone on-sale stay posted for more details on registration to the event for Free. All Block Nation members with a ticket to the Festival will be guaranteed entry to this event and that is the only to get in.
If you’re not currently a member of Block Nation, you can sign up for access to pre-sale tickets for the festival and upcoming shows in the future.

The Producers of the Festival have set aside amazing tickets for Block Nation Members – They will go on sale Saturday April 23rd at 10am EST.
VIPs will be available starting with the BLOCK NATION Pre-sale and available during general on-sales as well. They are outlined below:

VIP
Great seat in sections A, B, or C
Ticket to VIP Afterparty
Early Entry into Venue
Dedicated Merch/Concession Area

VIP After-Party
Immediately following the festival, we’re going to keep the party going. We’ll head straight to the VIP after-party inside the Hershey Arena (Across from the Stadium). You must have a VIP ticket to get access to the after-party.
Look out for the full announce soon!
Posted by NKOTB News at 2:14 PM No comments:

Danny has announced six more dates for his solo tour! Go to Remember Betty to get tickets (some of these are on sale now)!

May 19: Orlando, FL at The Social
May 20: Atlanta, GA at Aisle 5
May 21: Charlotte, NC at Neighborhood Theatre
May 27: Northampton, MA at Iron Horse Music Hall
May 28: Buffalo, NY at Studio At Waiting Room
May 29: Toronto, ON at Adelaide Hall 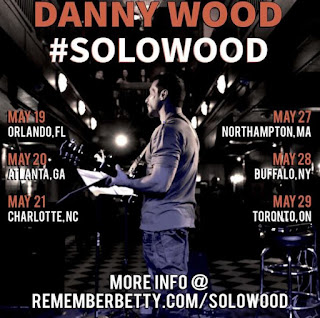 Posted by NKOTB News at 7:43 PM No comments:

People interviewed Joey last month about his family, dealing with his mom's Alzheimer’s diagnosis and more... Here is the article:

Joey McIntyre admits that the kids on the block he’s happiest spending time with are his own.

“I am present with my kids, that’s for sure,” McIntyre, who made his name in the boy band New Kids on the Block, told reporters at the 24th Annual “A Night at Sardi’s” fundraiser for the Alzheimer’s Association.

“They demand it. I’m lucky that I have the opportunity to spend a lot of time with my kids. I’ve got three little ones — 4, 6, and 8 — and never a dull moment!”

McIntyre, who attended the event with his wife Barrett Williams, revealed that as a dad he’s even picking up a new trick or two from his children, daughter Kira, and sons Rhys and Griffin.

“Griffin is teaching me how to be a decent soccer player … not really!” he jokes. “I never knew soccer, but he’s so good, he keeps me on my toes. Apple doesn’t fall far from the tree: They love theater, and they’re in different shows, and we have fun working on that stuff.”

For their part, the kids would rather follow their theatrical instincts than take tips from their seasoned pro dad. “They don’t take notes very well,” he says of the response to his attempt at guidance. “So I’ve learned very early on: If I have an opinion, don’t give it.”

The evening raised money to treat and cure Alzheimer’s disease and featured a number of celebrities performing Broadway standards old and new, including McIntyre’s lush rendition of “S’ Wonderful” from Funny Face.

“Something like this makes you realize what’s important,” says McIntyre. “My mom passed away about a year and a half ago from Alzheimer’s, and she suffered for a while. So that’s what brought me in, but it’s such a great night. It always has such a special vibe … and to be a part of it, I always felt very special.”

He admits that he feels he and his family handled his mother’s condition “not very well. I’m sure there’s lots of ailments and diseases that can tear people apart and tear families apart if you don’t have the help, but with Alzheimer’s, it’s so hard to figure out. When it first comes on, you just think they’re acting weird or acting selfish or being angry. Then, you realize that it’s not something they can control.”

Eventually, McIntyre says, his mother reached a more peaceful place. “Finally, after the paranoia and being scared at night, she had a few years of what was kind of bittersweet because there were a lot of tender moments, but she wasn’t all there. So it’s a hell of a thing, and that’s why we’re here,” he says.

My mom was 83 when she passed away and 75 when she came down with Alzheimer’s,” he continues. “That’s young nowadays, but what makes me keep showing up is for the parents and the people and the kids who see their loved ones getting this disease in their 50s and 60s. I can’t even imagine how heartbreaking it is. So we’re here, and we’ve done amazing things.”

And his focus remains steadfastly on family time. “I’m super grateful for just having a very full life,” he adds.

“We recently got a place back in Boston that we go for the summers. My kids see their 15 cousins, and I get to see my friends from back home — all that stuff that’s priceless. I sound like an old fogey, but I’m kind of like, ‘When’s the summer going to happen when we can get back home?’ ”

— Scott Huver
Posted by NKOTB News at 8:55 PM No comments:

Update: Video has been deleted, does anyone have it saved?
Posted by NKOTB News at 8:49 PM No comments:

Here are some clips of Donnie and Jenny on Watch What Happens Live:

Posted by NKOTB News at 5:41 PM No comments:

Email ThisBlogThis!Share to TwitterShare to FacebookShare to Pinterest
Newer Posts Older Posts Home
Subscribe to: Posts (Atom)
Top Stories
Joey McIntyre at Carnegie Hall
Joey will be performing at Carnegie Hall in New York City on January 14th!
Joey McIntyre solo concerts in LA
Joe will be performing on December 11 and 18 at The Bourbon Room!
2022 NKOTB Cruise
Some videos highlights and more are up!
NKOTB Funkos
New Kids on the Block Funkos won't be released until next spring, but they are now available for pre-order!
NKOTB News on Social Media
For breaking news, follow "NKOTB News" on social media: Twitter  |  Facebook  |  Instagram