Joey and Lance Bass performed some dance moves to classic songs by New Kids on the Block and Nsync on last night's episode of "Beat Shazam". Watch the video clips below!

Posted by NKOTB News at 8:15 PM No comments:

Joey McIntyre will be making an appearance on Beat Shazam tonight at 8/7c on FOX!

What do @SHAQ, @LanceBass and @joeymcintyre have in common? They are all on tonight's episode of #BeatShazam, starting at 8/7c! 🤩 pic.twitter.com/a9Xd6kp4f0 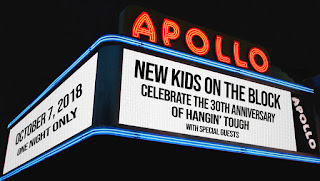 In honor of the 30th anniversary of Hangin' Tough, the New Kids on the Block will be performing one night only at the Apollo Theater in New York on October 7th. They also announced that there will be a "huge surprise announcement the next morning on Monday October 8th!"

Pre-sale tickets for the Apollo show on sale this Thursday at 10:00am EST for Block Nation members. No word yet if/when there will be a public on-sale. (I'll update if later if I hear anything).
Posted by NKOTB News at 10:51 AM No comments:

NKOTB in the studio

The New Kids on the Block are back in the studio! Here are a few photos and video clips from Donnie, Jordan, @passportflave, @kaygeenbn and @ladyandatrampmusic

Not sure what you’re doing on this quiet Sunday night ... But I know what we’re doing! #Grinding #InTheLab w @elgreatdane aka Lars! Next stop NJ w @kaygeenbn @jordanknightofficial @joeymcintyre @dannywoodofficial @jonathanrknight and few special guests! 2018 we ride again! 🎼🙌🏼❤️
A post shared by DONNIE WAHLBERG (@donniewahlberg) on Jul 29, 2018 at 8:23pm PDT

The gang’s (almost) all here! @jordanknightofficial @joeymcintyre @nkotb
A post shared by DONNIE WAHLBERG (@donniewahlberg) on Jul 31, 2018 at 5:02pm PDT

Posted by NKOTB News at 9:14 AM No comments: