NKOTB and BSB (Back Street Boys) have announced a joint tour starting in the summer of 2011. 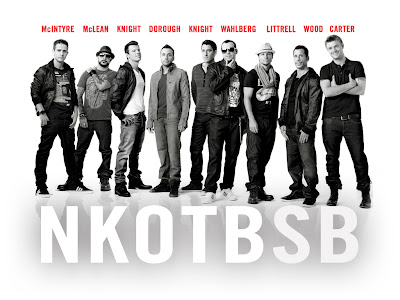 You first opportunity to see the two groups perform live together will be November 21st on the American Music Awards on ABC.

Also, both groups will be on the Ryan Seacrest Show on Monday morning (November 8) at 6AM (PST)

Here are some articles from the media about the tour:

NKOTB News Blog is now on Instagram
For breaking news follow the "NKOTB News Blog" on social media: Twitter  |  Facebook  |  Instagram
NKOTB to appear on The Kelly Clarkson Show
Airdate TBD! Hopefully they will talk about the rumors about new music and Mixtape Tour 2022
Behind the Music with NKOTB
Paramount Plus will be airing a new "Behind the Music" special with NKOTB is now airing!
The Wood Works
Check out Danny Wood's new YouTube series The Wood Works. Episodes post every Tuesday!
Farmhouse Fixer
Jonathan's show "Farmhouse Fixer" is now airing on HGTV and Discovery Plus!