The Boston Herald interviewed Jordan about his involvement with the opening Novara in Milton, MA. He also mentions briefly that the New Kids on the Block will be touring in June. Here is the article: 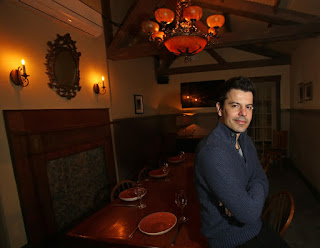 “I feel like this restaurant is going to put (East Milton) over the top and become a scene,” said Knight, a partner in the project. He gave the Herald an exclusive interview Monday night while noshing with his mom, wife, sisters and pals during a private preview dinner.

Novara opens to the public tomorrow, a large and dramatic new venture from restaurateur Vance Welch and the team behind Abby Park, just two doors down on Adams Street. Abby Park was the first full-­service restaurant in decades in sleepy, once-dry Milton when it opened in 2009.

Knight grew up in neighboring Dorchester with his famous 1980s boy-band brethren. He moved to Milton in 1997, has become an Abby Park regular and invested in Novara only at the last minute. And, no, he did not consult with fellow New Kid-turned-­restaurateur Donnie Wahlberg (Alma Nove, Wahlburgers) before making the leap.

“My involvement is real­ly organic,” said Knight. “I never wanted to be in the restaurant business. But I knew the owners. I knew they operated a great business and I knew that chef (Tony DeRienzo) made great and tasty food that’s always consistent. I knew he learned to cook from his Italian grandmother at an early age. That’s the best education possible and that was good enough for me.”

Novara is named for DeRienzo’s ancestral hometown in the Piedmont region of northern Italy. His menu features modern interpretations of pan-­regional Italian comfort food classics with local New England accents. DeRienzo, a Brockton native, studied at Johnson & Wales before working for such Boston chefs as Tony Ambrose and Lydia Shire.

Novara’s other star attraction is a cavernous dining room in the re-purposed former Milton Cinema, designed by Steve Todisco (best known for his work with Davio’s).

Knight hits the road with his old NKOTB bandmates in June “just to keep our legs oiled,” he joked.

In meantime, expect to find him dining in East Milton.

“The area is ready for this kind of scene,” Knight said. “It’s great for Milton and that’s exciting to me, because this is my town.”
Posted by NKOTB News at 9:58 AM