Bring NKOTB to Your City for Screening of "Coming Home" 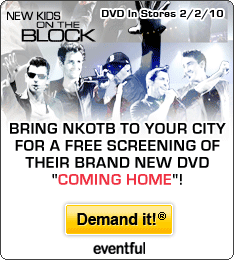 DEMAND US! Happy New Year to all of our fans world wide! We hope you had a wonderful holiday season and we are excited for what’s ahead in 2010! To kick the New Year off with a bang, and in celebration of our new DVD “COMING HOME”, we want to give YOUR city a chance to win an exclusive screening of our DVD, with all of us of course! *DEMAND NKOTB in your city NOW by visiting eventful.com/nkotb or nkotb.com. Top U.S. Cities win! NKOTB will hold a Question and Answer session following the screening!

*Only U.S. Cities will be eligible.


Get ready New Kids On The Block fans! Everyone’s favorite boy banders may be coming to a city near you! As part of their new DVD — Coming Home — launch, Joey McIntyre, Donnie Wahlberg, Danny Wood, Jordan Knight and Jonathan Knight have teamed up with Eventful, Inc. using the Demand It! service, allowing fans to demand NKOTB to come to their city.
“This journey has meant so much to us,” band member Donnie says. “After so much time away, our fans were still there waiting for us to come back, it’s incredible. They’ve traveled far and wide to support our reunion and to see us over these past two years. Now we are coming to them, and fans chose where on Eventful!”

The top three cities with the most demands will win the NKOTB experience in their home city!

NKOTB made a comeback after 15 years on hiatus.

Coming Home takes fans along their comeback journey as they traveled the globe performing in over 140 sold-out concerts.
Posted by NKOTB News at 2:30 PM