Here is an interview Donnie did with More Magazine 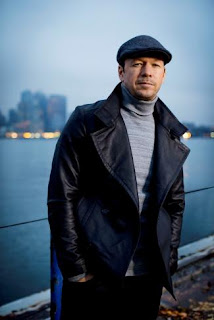 More: Congratulations on your new series, Boston's Finest.
Donnie Wahlberg: I am so excited and proud of this series. I wanted to make a docudrama that would focus on the real lives of police offcers both on and off the job. Before filming could even begin, we had to earn the trust of these men and women. Our goal was to have the heart-stopping drama TNT fans expect to see yet not damage any relationships the charactes spent years building.

More: This time you are stepping behind the camera and calling the shots.
DW: Yes, I serve as the executive producer of the show. This has been a true labor of love.

More: In addition to this show, you also star as Detective Danny Reagan on the CBS drama Blue Bloods. You have a real things for cops, huh?
DW: I do [Laughs}. Heck, having played a cop quite a few times, I hope I have learned from all of these experiences. Frankly, I think Blue Bloods has prepared to do this new program. I now understand the procedural world of a police officer in many situations, such as catching the bad guy and, of course, making it home safe to their families every night.

More: Blue Blood focuses a lot on the importance of family, including having real sit-down family dinners. What is Donnie's view on family?
DW: That family dinner scene was the main reason I did Blue Bloods. I got the script for the show at the same time I was reading a bunch of different pilots. When I saw how that dinner scene would be in every episode, I got hooked, because that is a slice right out of my real life.

More: Do tell...
DW: When I was growing up, there were nine kids in my house sitting down every night to have dinner. We would argue, fight, disagree, hear opinions and share what we did that day, just like you see on the show. That scene takes me right back to my childhood and feels so real.

More: Family first?
DW: For me, family is so important, both as a dad and as a sibling.

More: Was it hard being one of nine children?
DW: I am the eighth of nine kids and have always been the organizer of the family. When my parents split up, I was in the seventh grade. I immediately became the one would plan Christmas Eve and Christmas. I would always decide whose house we were going to, and then I would organize my siblings, including my brother Mark [the actor and former rapper]. I was the one telling them what the plan would be and then informing my parents as to what the arrangements were.

More: Did everyone get along?
DW: We fight and argue a lot, like most Irish Catholic families, but we love each other a lot and would die for each other.

More: Your TV family the Regans shows us how they come together during a tragedy, such as the death of your TV brother, your TV son's coma and your character's arrest for drugs. How do the Wahlberg's come together when times are bad?
DW: The episode when Danny's son is in a coma was a story I pitched to our writer. One of the things I talked about during our discussion was when my oldest sister passed away a few years ago and what that experience was like for me and my family.

More: I read about your loss. Can you take me back to those days?
DW: I remember being in the hospital waiting room and what it was like having our big family there. Until my sister passed away, after a few days, she was only kept alive by machines. We were all there. It was amazing how everyone bonded and always made sure my mom was OK and holding it together. It was such a powerful experience, and made us pull together immediately. Everything else in life went out the window and we did what we did to get through something so tragic. Although I don’t like to call on personal memories when I am acting, it does help me understand the character better and make the story more believable for the audience.

More: Because you come from a close-knit family, this experience must have been so painful for you.
DW: It was unexpected and just awful. But we are tough, we love each other and band together in the bad times.

More: While we are on the subject of family, how do you juggle a busy Hollywood career and being a single dad to two children?
DW: That’s been tough, and a real sacrifice for my two boys. They know I love working the different jobs and they are very proud and excited by them all. In fact, my little boy, who is 11 years old, is going to come on tour with me this summer. At the same time, it’s been a real struggle. He is in a new school but only on rare occasions do I get to drive him to school.

More: Does he understand?
DW: He knows about my work. What’s unfortunate is that I get to attend so few of his special events, and for me that poses a real challenge. In fact, I just had a four-day weekend with him and it was so hard to leave because he sacrifices so much for his dad. As for my older son, he is 19 years old, so it is different for him.

More: Some of your fans still remember you as a member of the popular group New Kids on the Block. While some performers try to break away from the boy-band image, you are returning to it by headlining a production called The Package Tour. Why?
DW: I got the NKOTB back together five years ago. I can’t say everyone thought it was the best idea in the world, but I believe in it and my band mates. I think we have something special to offer and people wanted to see and hear it again. To me, that is a great feeling. I feel much better about my band than I did 20 years ago; in fact, I am happier to be a part of it now than I was back then. On Blue Bloods, I am the actor; I show up and do my thing. With the New Kids, I am the executive producer. I have a lot more creative input. It’s a really good balance, and always a great challenge.

More: Was it hard to make the transition from “boy-band member” to “serious Hollywood actor”?
DW: It was tough, but I don’t think my journey was any tougher than any other actor's. If you have ever been on an audition, you know how intimidating it can be walking into a room and seeing hundreds of people trying out for one part. No role was handed to me because I was a New Kid. I had to really fight hard and work hard to earn the industry’s respect. I was determined to stick with it long enough, and I did, until the breaks came.