The Boston Globe interviewed Joey about his upcoming show "The Kid".  Here is the article: 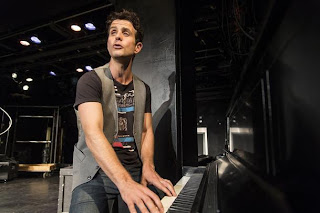 Joey McIntyre turns his life into a musical

Joey McIntyre began singing and dancing long before he was a member of New Kids on the Block. Indeed, McIntyre was just 8 when he made his musical theater debut, singing “Gary, Indiana’’ from “The Music Man’’ at the Footlight Club in Jamaica Plain.

“I’ve been doing this for as long as I can remember,” he says. “And, frankly, I could get up and sing songs for the rest of my life, but I wanted to tell a story.”

So he is. McIntyre will tell his own story in a new musical called “The Kid.” The one-man show, which he concedes is still taking shape in rehearsals, opens Aug. 29 at the Garner Galleria Theatre in Denver.

“It’s an idea I’d been toying with for awhile,” McIntyre says on the phone from the Mile High City. “I wanted to do something legit, to take on the challenge of doing something like this.”

“The Kid” will have a three-week run in Colorado before heading to New York. At least that’s the goal. McIntyre says he and the producers, William Sherak and Jason Shuman, are determined to take the show to the Big Apple, perhaps as soon as next spring.

“New York’s the end game. I want to get it to Broadway,” says McIntyre, who’s no stranger to the Great White Way, having appeared in “Wicked” and also Jonathan Larson’s “Tick, Tick . . . Boom!”

In promotional materials, “The Kid” is characterized as a “deeply personal coming-of-age story” tracing McIntyre’s career from the Footlight Club in JP to sold-out stadium around the world. There’s plenty of drama — on and off the stage — along the way. The show is directed by Eli Gonda and written by Christine Boylan, a TV writer whose credits include “Leverage” and “Once Upon a Time.”

The music, which (for now) is performed sparely on piano or guitar, includes songs by New Kids, Gershwin, Nat King Cole, and even a tune from the musical “Oliver!” To prepare, McIntyre, who’s now 40 and a married father of three children, says he watched performances by Elaine Stritch, Lena Horne, and Bette Midler.

“To see an artist on stage for an hour and a half and really staying in the moemt and taking that journey every night is great,” he says. “I get little things from everybody I watch.”

So will McIntyre’s NKOTB bandmates Donnie Wahlberg, Danny Wood, and Jordan and Jonathan Knight come to see the show?

“I definitely want them come out and see it, as friends but also to add their thoughts,” he said. “And we’ll have some people from the theater world who will, hopefully, say, ‘Let’s take this to New York.’ ”
Posted by NKOTB News at 4:49 PM