NKOTB News for May 18

Sorry I have fallen behind on updates lately. Here is quick update about what's been going on with the guys:

Jordan, Joey and Danny cruised around Boston’s Seaport in a yacht in  to spread the word about "Rock This Boat: NKOTB" season 2. Check out their interview with the Boston Globe and another article, photos and short video clip here.

If you missed Donnie on Rachael Ray Show a couple weeks ago, here are some clips:

The Hangin' Tough album is the subject of one of the latest 33 ⅓ classic album book series. The author Rebecca Wallwork talks to The Guardian about the New Kids on the Block's influence and more.

WQAD interviewed Donnie during his visit to the Quad Cities last month for 7th annual "Intimate Conversations Fundraiser". Here are some video clips: 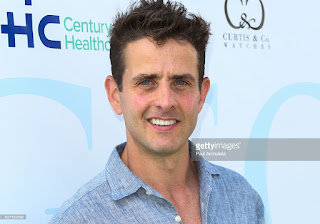 Check out some photos of Donnie and Jenny out and about in New York City. They were promoting the new Prom Radio Channel launched by SiriusXM.

The Holderness Family on YouTube created a parody of The Right Stuff. Here is the video: