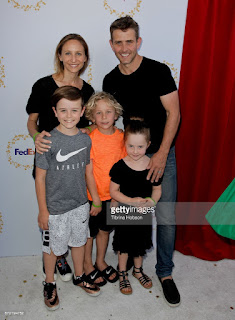 Joey and his family attended the "Safe Kids Day" at Smashbox Studios on April 23, 2017 in Culver City, California. Check out some more photos and a brief article from People Magazine.

Culver City, California, was quite the hotspot for celebrity families Sunday — and for a great reason.
Stars like James Van Der Beek, Lisa Ling and Joey McIntyre stopped by Smashbox Studios to take part in Safe Kids Day 2017, “an annual fundraising campaign to support the life-saving programs of Safe Kids Worldwide and [their] local coalition partners.” The organization works to help minimize preventable injuries both in the U.S. and globally, such as drownings, poisonings, traffic incidents and more.
Speaking to PEOPLE at the event, McIntyre — who attended with wife Barrett Williams and their three kids Kira Katherine, 5½, Rhys Edward, 7, and Griffin Thomas, 9 — said one of the most valuable things he’s picked up from attending the event have to do with vehicle safety.
“You want to move on and get rid of the car seats, or get rid of the big car seats, but maybe they’re not ready yet. So you’ve got to pay attention,” the New Kids on the Block member shared.