Click on the links below for some recent articles and interviews with Joey McIntyre...

Boston Globe: Joey Mac is back, in a charming sitcom

CBS Miami: Joey McIntyre Is Back With New Series ‘Return Of The Mac’ 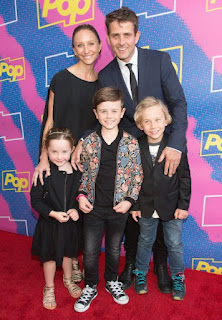 Joey McIntyre has a lot to be thankful for. His new show airs on Wednesday and he gets to work with his whole family — because they are all his costars.
“It’s a wonderful thing,” the New Kids on the Block member said at the premiere of Return of the Mac in Los Angeles on Thursday night.
“We’ve been blessed and we love to create,” adds McIntyre, 44. “We’re a part of each other’s lives.”
The creativity definitely runs in the family. One example? Griffin Thomas, 9, designed the jacket he was wearing on the carpet, and had a fashion show the next day that the entire family attended.
“I sewed it and designed it,” Griffin said of his floral zip-up jacket. (The little guy’s younger siblings are sister Kira Katherine, 5½, and brother Rhys Edward, 7.)
His dad added that Griffin learned how to hone his skills at camp. “There’s a great camp called The Unincorporated Life and they do a great job. He learned it and he loves it, so it’s a new beginning for him.”
The McIntyre kids have jam-packed schedules. “It is a lot. Just their lives alone,” says the singer and actor. “Kids are very, very busy. They need lots to do, and for better or for worse, that’s how it is, and we’re lucky.”
There is one thing McIntyre misses: One-on-one time with his wife of 13 years Barrett Williams. “It would be nice if we could go out on a date every once in awhile,” he jokes. “I’m trying to work that back into the schedule.”
As for his dream date night? “Us at a bar. Any bar … anywhere.”
Return of the Mac premieres Wednesday, April 12, at 8:30 p.m. EST/7:30 p.m. CST on Pop.