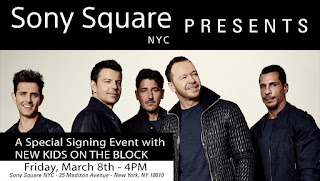 To celebrate the release of Hangin' Tough 30th Anniversary edition, NKOTB will be appearing at Sony Square in New York City on Friday, March 8! You can pick up your copy and get it signed by Donnie, Danny, Jordan, Joey & Jonathan.

Here's what you need to know: