The Boston Herald posted an article about Donnie taking the time to show a fan who is interested in being in show business to a taping of Blue Bloods....


Dorchester native Donnie Walhberg is a reminder there are really good men in this world willing to put aside their super busy, hectic lives to uplift others.

And help them achieve their dreams.

My teenage daughter Brittany and I experienced this firsthand on Friday in Brooklyn, N.Y., where Wahlberg welcomed us to the TV set of “Blue Bloods,” his hugely successful CBS series now in its ninth season. Debuting in September 2010, the popular family cop drama, starring Wahlberg playing the beloved lead Detective Danny Reagan alongside Tom Selleck and Bridget Moynahan, is a Friday night staple for millions of devoted viewers nationwide.

Brittany and I visited the set Friday afternoon and spent several hours with Donnie and the super nice cast and crew and watched a live taping of its latest episode. Wahlberg, whose multitalented wife, Jenny McCarthy, has been a guest on my Herald Radio show, got wind my daughter is an aspiring actress and invited us to the “Blue Bloods” set to experience a live taping so she can learn about TV production, meet the talented cast and crew, and pick up a few acting tips along the way.

And who could be better than Donnie — a terrific actor, businessman, musician of New Kids on the Block fame and TV director who’s starred in multiple hit Hollywood films over the decades in addition to the smash success “Blue Bloods.”

In between takes, Donnie came off-set and gave Brittany acting lessons and tips on how to memorize lines, bringing emotion to a scene and much more. We were blown away by his generosity and kindness and couldn’t be more grateful for the opportunity.

As Brittany and I rode in an Uber to dinner in Little Italy later that evening, we discussed the importance of sharing one’s success with others and that no matter what career she ultimately pursues to always remember to spread sunshine toward others and pay it forward. 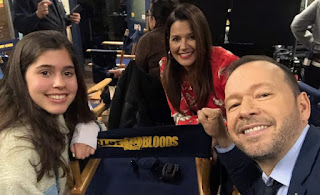 Adriana and her daughter Brittany on the Brooklyn set of Blue Bloods with Boston native Donnie Wahlberg.