Here is a recent article (and photo) from BostonHerald.com 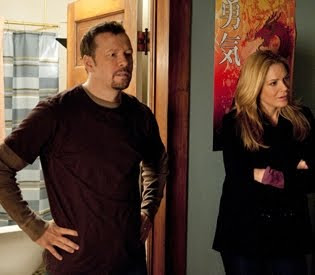 
Photo by USA Network
When the writers of USA Network’s “In Plain Sight” needed a Boston guy to throw into the Witness Protection Program, they needed to look no further than Donnie Wahlberg.

The Dorchester homey guest stars on Wednesday’s season premiere as a Hub truck hijacker who is hiding out in New Mexico with his teenage son and new family.

“There are certain times when fame and success have become challenging and hiding out has seemed really appealing to me,” said Wahlberg, who spent last week in Toronto filming the CBS cop show “Reagan’s Law” with Tom Brady [stats]’s baby mama No. 1, Bridget Moynahan.

“I’ve traveled to some real obscure towns and thought what it would be like to set up shop here and disappear. But I’d eventually go stir crazy and miss all that I take for granted.”

Usually, when Donnie’s in a new town, he sends out Tweets to meet his obsessively devoted New Kids fans - whom he calls “soldiers” - to get a feel for the locals.

But to get into character for his witness protection gig, Donnie said he flew to New Mexico - where the Mary McCormack-Frederick Weller drama films - a week early and “laid low.”

“Living life on the run and living with a false identity is a hard thing to do,” he said. “Fugitives sometimes turn themselves in because they can’t live with the pressure.”

As for playing a Boston underworld figure, that wasn’t too hard to master.

“There’s always someone to draw on, someone you pluck off the street - a friend, a cousin, an uncle,” said Wahlberg. “It’s the worst thing in the world to get it wrong because there’s that added pressure to get it right. If you stink it up as a Boston guy, I will get a lot of flack when I come home!”

“It just sort of didn’t fit timing-wise for TNT,” said Donnie. “So it was rebuild it or try something else.” Hence, “Reagan’s Law.”

So now that Donnie’s spending lots of time on the tube, what programs does he TiVo?

(Coincidentally, in his ‘In Plain Sight’ episode, his character owns a diner that is known for its popovers.)

Donnie said he was also a fan of “The Shield,” which starred Andover homey Michael Chiklis as a cop working on the edge, and “The Sopranos” cast because they weren’t “typical Hollywood leading men. They were regular guys.”