Joey McIntyre and Howie D will be in the UK the week of February 20 to do promotion for the upcoming NKOTBSB tour! (From Shoshanna Stone).

Donnie is mentioned briefly in an article on the Indy Star website:


New Kids on the Block's Donnie Wahlberg was spotted strolling along the Patriots' sideline and chatting with reporters, including Biff Henderson (stage manager for "The Late Show with David Letterman") just before kickoff. "The Hoosiers have been great," said Wahlberg, a Boston native. "Hoosier hospitality is amazing." 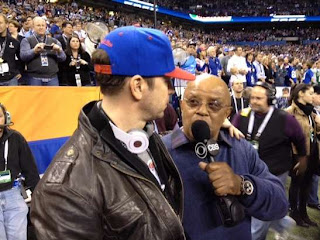 So maybe this interview will be shown on an upcoming Late Show with David Letterman show?
There will be a Jordan Knight Post Show VIP Sunday Brunch in Louisville. Tickets go on sale 10am EST Tomorrow!

There are some photos of Jordan at the Third Annual Dancing For Hope 2012 fundraiser on their Facebook page.

The NKOTB and Us book will be released in October 2012. Exact date to come soon.