Jordan was recently interviewed by the Toronto Sun. Check it out here.

New Kids are back in the starting blocks.
Mere months after polishing off an international tour with Backstreet Boys, the Bostonians are already at work on their first new record since their 2008 comeback disc, says Jordan Knight.
“We’re doing an album now,” the 42-year-old vocalist confirms. “We’ll be touring with it next year. It’s exciting; the last album we did was four years ago. It’s going to be great for the fans — but it’s going to be really great for us because we’ll be re-energized with new music, new videos, new dance moves, a new stage act. It’ll be new, new, new.”
That reinvention may extend to their sound, he says, claiming NKOTB would even be willing to try their hand at dubstep — though a mashup with genre superstar Skrillex might not be in the offing. “Who?” Knight asks. “See? I’m showing my age there. But we do like to mix our classic sound with whatever is going today so it’s very relevant. We like to keep on top of the trends.”
But before moving forward with bandmates Joey McIntyre, Donnie Wahlberg, Danny Wood and his older brother Jonathan, Knight has to take care of some unfinished business: Touring Canadian theatres with his own band in support of his 2011 solo album — titled Unfinished, appropriately enough. While driving in the slow lane outside Boston, he chatted about being secretly Canadian, life as a middle-aged heartthrob and stretching on the Lido Deck.
You just finished the NKOTBSB tour in June and you’re touring again. Are you broke or a workaholic?
Yeah, what’s wrong with me? I think I’m a workaholic. Really, the thing is that I didn’t get to do my solo tour and sing my new music in Canada. I did about 20 cities in the States and I got a lot of requests to go to Canada. So I felt the need and the desire to top it off with a Canadian run.
It seems there’s a strong connection between New Kids and Canada. You started your 2008 comeback tour here. Why the love?
Well, both my parents are from Canada. I’m actually a dual citizen. I definitely have Canadian roots. I mean, I definitely consider myself an American because I was raised down here, but every Christmas I would go to my grandparents’ house at Dunville, Ont., and every summer we’d spend time on Lake Erie. We were always heading up to Canada. So there’s definitely a connection.
What’s the difference between Americans and Canadians?
I’ve always thought of Canadians as salt of the earth people. All my relatives, you could just feel the Canadian essence when we would go visit. They were just good people. Not that I’m saying Americans are bad people — at all. I just feel comfortable around Canadians. They’re more polite. That’s for sure.
How do you feel about touring theatres with your solo band instead of touring arenas with New Kids?
I look at it as a special thing. I don’t look at it as a downgrade. It’s just a different setting. It’s cool to be in a smaller setting with hardcore fans. They get to have a more closeup view, and I get to be more off the cuff, instead of having a set show in an arena where every song has to be a smash. I get to sit at the keyboard and sing songs of mine I wouldn’t be able to do at a big show. I can take my time, I can do whatever I want: Make a joke, have a laugh, bring someone onstage. It’s more of an in-the-moment experience.
Does being a heartthrob make it tougher to be taken seriously when you’re in your 40s and trying to get people to listen to your music?
Nah. I think the fans can enjoy the music I make and see me as a heartthrob. It just comes with the package. But I don’t feel like I’m going out there and living off my image of when I was 18 years old. I put a lot of pride into my work and that’s why I’m still doing it. And I believe they feel that.
It could be worse: You could be a former heartthrob.
Yeah. That would just be sad. I don’t think I’d be on the road if that was the case. Then again, I probably would. I love it too much to let that stop me.
Speaking of getting older, how are you holding up? Is it getting tougher to keep up with the physical demands of your show?
There’s a lot of stretching, I gotta tell you. But I’ve always been big on stretching. Fans know me as someone who likes to stretch. Actually, on one of our (concert) cruises, I did a stretch class on the Lido Deck. The whole ship was watching me do yoga moves. And on Twitter, there was a time when I would walk fans through stretches every morning. I guess it’s pretty weird.

Charity Buzz has an auction for an opportunity to be the guest of Donnie's on the set of Blue Bloods. The proceeds from this auction benefit The Felix Organization (which provides inspiring opportunities and new experiences to enrich the lives of children who are growing up in the foster care system). You can place your bid here.


Here is a photo from Jordan's first show in Canada last night. 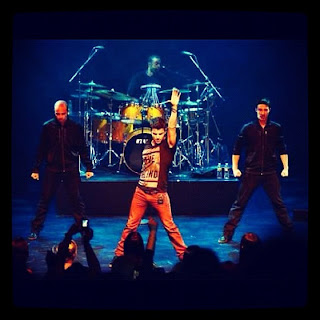 Joey took his son Griffin to see Justin Bieber and here a photo that Joey shared of them. 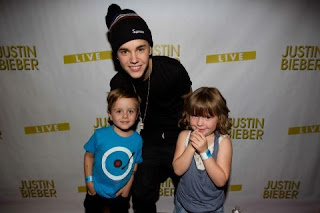 Here are some photos of Donnie with Jenny McCarthy, Andy Cohen (and even Lumpy) from when he was on Watch What Happens Live. 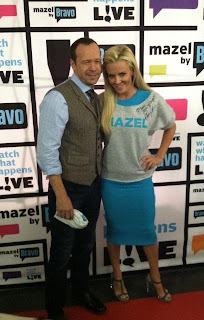 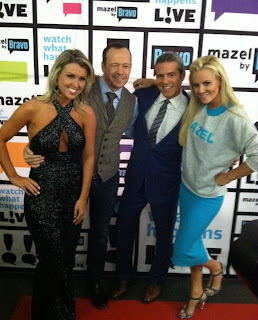 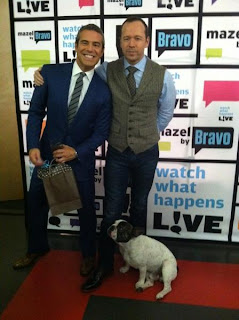