Here is an article from the The Boston Globe in which Donnie talks about the Boston Strong concert on May 30th. 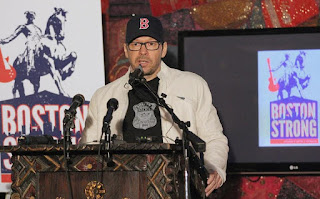 Donnie Wahlberg at the announcement of the concert to benefit victims of the Marathon bombings.

A star-studded rock ’n’ roll fund-raiser on behalf of the victims of the Boston Marathon bombings is shaping up to be a cause for serious celebration.

The event, dubbed “Boston Strong: An Evening of Support and Celebration,” is set for May 30 at the TD Garden, and will include four hours of music and comedy from some of the biggest names in Boston (and beyond), including Aerosmith, Boston, New Kids on the Block, James Taylor and Carole King, the J. Geils Band, Jimmy Buffett, Dane Cook, and Steven Wright.

Tickets, which will be priced from $35 to $285 — with no surcharges or fees — go on sale Monday at 10 a.m. at www.ticketmaster.com. Net proceeds from the show will benefit The One Fund, which has so far raised more than $27 million for victims of the bombings.

At a press conference Friday at the House of Blues, veteran promoter Don Law of Live Nation credited New Kids on the Block for suggesting a concert to benefit those affected by the horrific events of April 15. Law said all of the bands are playing for free, and TD Garden, Ticketmaster, and several hotels are also participating at no charge. (Law said labor and shipping will be the only expenses.)


New Kids member Donnie Wahlberg, back in Boston for the first time since the bombings, became emotional as he spoke of his desire to do something — anything — to help the city and lift people’s spirits.

“I’m very rarely speechless, but I find myself searching for words today,” he said. “[The bombings] affected all of us to the core and we all feel compelled to fight back, to step up, and this is our way to do that.”

“It just kind of rolled from there,” he said.

The stellar lineup, which apparently is still coming together, also includes Godsmack, Extreme, and country star Jason Aldean. (Notable for their absence are the Cars, who, we’re told, have not been approached about playing.)

Law said Aerosmith is on the bill even though the band has a show in Singapore a few days before. Buffett, he said, reached out after the bombings and asked to participate if such a concert was scheduled.

Concern about resellers scalping tickets at sky-high prices has prompted organizers to use paperless tickets. That means people who purchase tickets will have to present the credit card used to make the purchase and a valid ID to get into the concert.

Law acknowledged that the paperless ticketing system presents problems of its own — 15,000 people showing credit cards and IDs at the door will slow things down — but it’s the best way to inhibit scalpers. Before the 12.12.12 Concert for Sandy Relief at Madison Square Garden, tickets originally priced from $150 to $2,500 were selling on the secondary market for several thousand dollars each.

“We’re doing everything we can to keep the brokers out of this,” said Law.

The show will start promptly at 7 p.m. and sets will be kept short in order to get all of the acts onstage. Asked if his brother, actor Mark Wahlberg, might reunite with the Funky Bunch at the show, Donnie smiled. (Mark had said “Why not?” when asked if he and the Funky Bunch might perform at a benefit for victims.)

“Mark definitely wants to be there,” said Donnie. “Will he rap? I don’t know. I produced that record, so I’d sure like it if he did.”

But Donnie said the big draw for him wouldn’t be his brother.

“You’d probably be surprised that my favorite artist on the bill is Carole King,” he said. “I’m really excited to see her perform.”