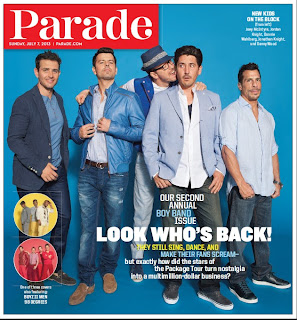 The New Kids on the Block will be featured the the July 7th issue of "Parade" magazine! (The magazine is usually found in Sunday newspapers in the US.)

Here is a behind the scenes clip of the photo shot with NKOTB!


Here are some highlights featured on their web version of the magazine (see full articles here and here):


On the lucrative business of boy bands:
“We’re the best-kept really big secret going right now. We are a successful small business. It’s us and our customers. The more satisfied our fans are, the more satisfied we are.” —Donnie Wahlberg (New Kids on the Block)

On today’s boy bands and young stars like Justin Bieber:
“Thinking back to other boy bands and Justin Bieber—people go through a natural life evolution. Everyone knows when you’re 18 you get restless and you want to move away from home and start experimenting. It’s fascinating that we don’t apply [that knowledge] to famous people.” —Donnie Wahlberg (New Kids on the Block)

On their early fame:
“It’s just a peculiar position to be in. A large percentage of the population treats you like you can walk on water, and others treat you like you’re not worth [anything.] The truth is somewhere in the middle, and to find that truth is the real struggle. If we believed the adoration of all the girls, we could easily have lost our way; if we believed the spite of the naysayers, we could have lost our way in the opposite direction. Fortunately, we had each other. We didn’t allow anyone to get too carried away.” —Donnie Wahlberg (New Kids on the Block)

“It’s weird calling them ‘fans.’ I mean, we love to rock the house and they love to play their role in that as well. But offstage, it really is a family. There’s just a ton of love.” —Joey McIntyre (New Kids on the Block)

On today’s boy bands and young stars like Justin Bieber.
Jordan Knight: “A lot of people say we’re the forefathers of the modern-day boy band. But also I think you’ve never really seen a boy band come back like we have; [that’s] part of our legacy [too]. Hopefully we’re showing younger boy bands that there’s life after your first surge as long as you keep at your craft, establish a relationship with your fans, and keep your head on straight.”

Danny Wood: “Our situation is different than other groups, even the Backstreet Boys. We grew up together, so we have that to fall back on. I have these four guys with me and a lifetime of experiences together…. That’s the big difference between us and someone like Justin Bieber. He’s on his own.”

Donnie Wahlberg: “Thinking back to other boy bands and Justin Bieber—people go through a natural life evolution. Everyone knows when you’re 18 you get restless and you want to move away from home and start experimenting. It’s fascinating that we don’t apply [that knowledge] to famous people.”

Jordan Knight: “It’s also human nature that when somebody has a whole lot and they’re really young, people want to bring them down.”

Donnie Wahlberg: “He [Justin Bieber] has been in a fishbowl for four years. He’s behind. We were behind. When I was 24 and stopped touring with the New Kids, I thought I could meet with businessmen—that I could walk into any office in in the world and feel totally at ease and talk my way into some kind of deal and walk out with a check. I had total confidence. But I couldn’t book a trip for a weekend getaway. In some ways I was the exact same 18-year-old boy I was before I left for the tour five years earlier. I was looking in the mirror like, ‘Who am I?’ ”

On meeting their fans’ children.
Jordan Knight: “They name their kids Jordan. It’s the newest craze.”
Joey McIntyre: “Jordan’s a great name. I mean, the rest of us have nice names, but they’re pretty…”
Jonathan Knight: “…common.”
Joey McIntyre: “You can’t lose with Jordan. And it can be [for] girls and boys.”

On not taking their fans for granted.
Donnie Wahlberg: “We’re playing a sold-out arena on a Monday night. I imagine those 15,000 people that are going have a lot of other options, but they’re choosing to spend [time] with us. We don’t take that for granted. I think we had a good relationship with our fans when we were kids, but we didn’t understand how significant it is for someone to max out their credit card to come see us. We take that really seriously, and we try our best to never let anyone go home disappointed.”

On what they’re excited to perform on the Package Tour.
Joey McIntyre: “We enjoy playing the hits. We don’t sit around and listen to the Hangin’ Tough album, but when we’re performing it for 20,000 people it’s the greatest [thing] in the world.”

Announcing Mixtape Tour 2022
NKOTB will be hitting the road with En Vogue, Salt-N-Pepa and Rick Astley May 10-July 23, 2022!
Knight Brothers to "Rock the Block"
Jonathan and Jordan Knight will on the season premiere of the HGTV show "Rock The Block" on Feb. 28
The Wanderer with Joey McIntyre
Joey will be starring in "The Wanderer" from March 24 to April 24 at the Paper Mill Playhouse in NJ
NKOTB and New Edition on the AMA's
The two groups shared the stage together for the first time at the American Music Awards! Check out the video of their performance!
Farmhouse Fixer
Season 2 of Jonathan's show "Farmhouse Fixer" is coming this summer!
The Wood Works
Check out Danny Wood's YouTube series The Wood Works. Episodes post every Tuesday!
NKOTB News on Social Media
For breaking news follow "NKOTB News" on social media: Twitter  |  Facebook  |  Instagram