NKOTB in Rip It Up magazine

New Kids on the Block is featured in June/July Issue of Rip It Up magazine (New Zealand). Here is a preview of the article from @KoolKiwis. 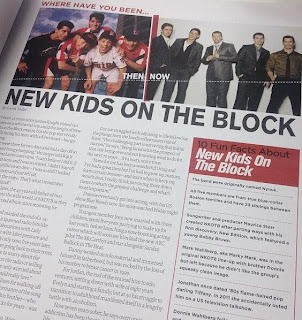 It’s been 21 years since Jordan Knight visited our shores on a whirlwind trip amid the height of New Kids On The Block mania, and 20 years later he’s leaped back into the wild world of NKOTB as they prepare to release their new album 10, their second since reuniting for 2008’s The Block, which marked the end of a 14-year hiatus.

While Jonathan made headlines for walking off stage mid set due to him suffering anxiety and panic attacks, the group all had to weather personal battles following the sudden comedown from their huge success in the late 80s/early 90s. Rip It Up spoke with the group in the June/July issue, and learned Donnie struggled with adjusting to life after the band’s plunge from fame, but eventually following in brother Mark Wahlberg’s footsteps and taking up acting. He says “the challenging part is surviving that initial success… Being faced with the prospect of that ride being over and not knowing what to do for the next 70 years… it’s a scary, scary time.”

Youngest member Joey also took up acting, after spending five years partying to make up for lost youth. Danny worked on solo material and immersed himself in fatherhood, but was rocked by the loss of his mother to breast cancer in 1999. For Jordan, the end of an era lead him to solo ventures, settling down with wife of eight years Evelyn and starting a family, but at 30 his struggle to transition to adulthood manifested in a battle with alcoholism – now seven years sober.

While being sober means he’s no longer partying on the road, he says he has more fun on the road now and that the group still joke around as much as they used to , although they have outgrown pranks. “Pranks will break up a group! We used to prank our bodyguards…those guys wont come near us anymore!”
Read the full story about New Kids on the Block and 10 fun facts about them in the June/July Issue of Rip It Up. Purchase online here or at your local magazine retailer.
Posted by NKOTB News at 8:12 PM