Joey was recently interviewed by Los Angeles Confidential about the early days of NKOTB, their current tour and more. Check out the article below: 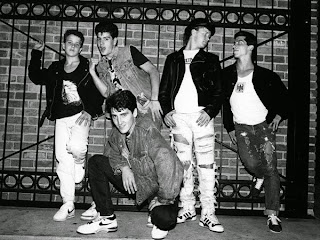 Much to the delight of their fans, groundbreaking boy band New Kids on the Block is back on tour this summer, this time with Nelly and TLC. Here’s what NKOTB’s Joey McIntyre had to say about the band’s past and what to expect from this tour.

New Kids on the Block, the poppy boy band that enjoyed a decade of success from 1984 until 1994, reunited in 2007 and released an album featuring new music in 2008. NKOTB hasn’t slowed down since then, going on tour with other boy band acts like the Backstreet Boys, 98 Degrees, and Boys II Men. This summer’s tour pairs the grown-up but still sizzling pop icons with fellow throwback favorites TLC and Nelly.

We caught up with NKOTB’s Joey McIntyre in advance of the tour’s stop at The Forum this Saturday (May 9) to find out his favorite NKOTB song, if the group has any rivalries with other boy bands, and, of course, his thoughts on fanny packs.

How did New Kids on the Block first form?
JOEY MCINTYRE: It wasn’t a casting call—it wasn’t like a big cattle call with thousands of people. It started with Maurice Starr, a writer and producer, who wanted to form a group that was like New Edition but with white kids, and the first guy he met was Donnie Wahlberg. For a while it didn’t really go anywhere, but then Donnie took it upon himself to go find [other] group members. He found kids he went to school with, kids he knew could sing, kids that were in the church choir—[he] literally just drove around the neighborhood. [The group] was together for a few months and they knew they wanted a little guy. Even though they were 15 at the time, they wanted a 12- or 13-year-old. I was a couple of towns over in Boston doing musical theater. They were calling schools and my name came up and I auditioned. The next week I was in the studio with them, and the rest is history.


What is the most outrageous, completely '80s/'90s outfit you ever wore in the early days of NKOTB?
JM: The fanny pack. We used to rock fanny packs. And my hair got very big at one point in time. Between those two, I was representing well.

What is your favorite NKOTB song?
JM: “Cover Girl.” I mean, “Please Don’t Go Girl” is probably in a class by itself—that was our first top ten hit—but I just like “Cover Girl.” It’s just really sugary and very pop.

You've performed with a ton of other '90s acts like Backstreet Boys, Boyz II Men, 98 Degrees, and now TLC and Nelly. Any favorite moments? Are there any rivalries?
JM: We’ve had a great time on every one of our tours—teaming up with the Backstreet Boys was a great combination. I think that tour was a home run and considered a really great tour within the industry, and our fans were certainly happy. Boyz II Men are just a phenomenal group. To share the night with them was awesome. [There were] a lot of laughs—those guys are really funny. We had a blast backstage. We’re just starting with TLC and Nelly but they’re really good people—really warm and really happy to entertain and give people a great show, so it’s nice to be around that energy.

What sets this tour apart from other tours?
JM: I think it’s a little out of our box with TLC and certainly Nelly. We’ve usually have a boy band package; this is a little more musically-loved. TLC is arguably one of the biggest girl groups in the world and [has a] history of pop music, so that’s a good combination for us. Every time we go out on tour, we want to be excited, we want to get goosebumps. And if we get goosebumps, we feel like our fans and the crowd [will be] excited. We’ve got a huge stage in the round, it’s very interactive with the audience so it will be exciting.

Any favorite places to hang out in LA?
JM: I like Osteria La Buca on Melrose. Soho House is the prettiest place to hang, you can’t get better than that. I like to run—I’ll go all the way from Crenshaw up to Griffith Park. What I love about LA is it’s such a melting pot. You could be in Hancock Park with big houses and then half a mile away you’re running past bodegas and swap meets, which I love. That’s what makes LA such a well-rounded place to live.