Jonathan was featured in a recent article from Boston Herald...


Jonathan Knight gives glimpse at life on his Essex farm 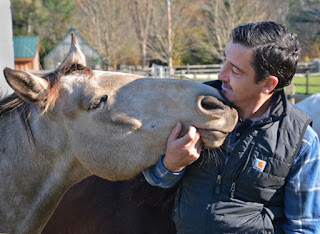 Jonathan Knight goes hog wild when it comes to his farm life with husband Harley Rodriguez. The New Kids on the Block singer and home restoration pro shared what it’s like getting his hands dirty on their estate in Essex — a passion that apparently stems from his childhood.

“When (my family and I) lived in Dorchester, we had three-quarters of an acre,” Knight told the Track of his Boston upbringing. “We had sheep, a couple of goats, a pony, two pigs, some pigeons and roosters.”

“We always had some type of animal coming through there,” he said. “This was in the late ’70s, so there weren’t all of the regulations about what you could have and what you couldn’t have.”

While in his 20s, Knight went full-country and purchased his first property in Essex. He took a six-year break from the North Shore while he and Rodriguez lived in New York City, but he returned to the town about a year ago when the pair bought the farm from his mother and made it a home.

Among the features found on the sprawling property is a barn built in the 1700s that they had dismantled, shipped to Maine, restored and then reassembled. The land also boasts a bountiful garden that Knight has grown from the ground up.

“I had never grown vegetables before,” he said. “I just tried it, and everything did so well. … Now I’m kind of hooked.”

“This year, I actually had it scaled-down because … I just got crazy and next thing you know we’ve got like 25 eggplants growing.” he said. “But ultimately, I would love to have just a big huge garden where I can grow food and donate it to a food bank.”

He and Rodriguez are also proud papas to a small herd of animals, including six chickens, three horses and 11 ducks. They have four hives buzzing with bees — although Knight adamantly abstains from any apiary duties.

“I’m actually so afraid of the damn things, so I stay away from them,” Knight said. “My mother went and took the beekeeping course with my nephew, so they’re the ones that are in charge of all that. … They start swarming at me and I start running for my life.”

Bee business aside, Knight keeps plenty busy tending to the 7 acres of land he and Rodriguez call home.

“It’s a lot of work, just even cutting the grass,” Knight said. “The good thing is my family seems to migrate up here every weekend. When I’m not looking I’ll suddenly see my sister jump on the lawnmower and just start mowing.”

And Knight, whose HGTV pilot “Farmhouse Fixer” will soon have its release date, keeps adding new endeavors to their pastoral to-do list.

“It’s never-ending,” he said of his docket of projects. “I always get these romantic notions.”

Case in point: Just last winter, Knight impulse-bought a tiny forest so he and Rodriguez can someday cut down a Christmas tree on their own property.

“I go online and I order trees not even knowing what I was ordering,” Knight said. “Three days before (The Mixtape Tour) started, 100 Christmas trees showed up at my house, little seedlings. I’m up all night before tour, putting them in pots, making sure they’re going to be OK while I’m gone.

“I actually just put about 30 in the ground last week. Hopefully they’ll make it and in 10 years, I can have my romantic moment of cutting down a Christmas tree on my own property.”
Posted by NKOTB News at 8:22 AM