Here is an article from Patch about Donnie at Target's annual Heroes and Helpers program in NJ: 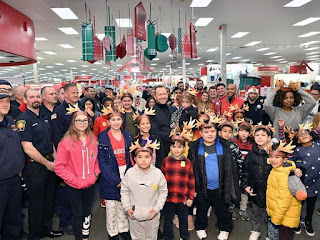 Wahlberg and local police officers teamed up for Target's annual Heroes and Helpers program at the Edgewater store.

EDGEWATER, NJ — Donnie Wahlberg once sang about how he wanted the "right stuff." On Wednesday, the former New Kids On The Block singer-turned-actor gave it to a group of under-served kids in Bergen County.

Attendees shopped alongside 110 kids as they picked out gifts for their families, and took selfies with first-responders and Target team members, Target said in a recap of the event on its website.

Englewood Cliffs officers Jae Lee and Chris Minetti volunteered their time and attended the event. They and the other officers were paired with a few kids each.

"I was a little nervous, and didn't know what to expect, but they just paired officers up with kids. It went really well," Lee said. "We welcomed the kids, we helped them pick out toys and gifts. It went great."

Englewood Cliffs Police Chief William Henkelman said he was proud of his officers for participating in the event.

"They sacrificed time with their own families to participate," Henkelman said. "If they can put a smile on those kids' faces, it's all worth it."

Target provided an $11,000 endowment that was evenly split among the 110 kids, said Jill Sullivan, Edgewater's recreation director. The kids rode in firetrucks, ambulances, and a lot of police cars to the store in a Parade of Heroes. Wahlberg and Bullseye, Target's mascot, greeted the kids at the store.

The Fort Lee Police Department wrote about the event on its Facebook page.

"‪Fort Lee Police and Donnie Wahlberg at Target today for Heroes and Helpers creating some holiday magic for under-served kids and their families," the department posted on its Facebook page, along with a photo of officers with Wahlberg.

"The addition of Donnie made it a memorable night for the hundreds that participated in the community give-back event," Target said.

Target has helped host and fund the Heroes and Helpers events in their stores for the last decade. More than 100,000 kids have shopped alongside 60,000 public safety workers at more than 2,300 Target stores. Target has provided more than $5 million in grants to fund the program.
Posted by NKOTB News at 8:53 AM