More "day in the life of NKOTB" from AOL 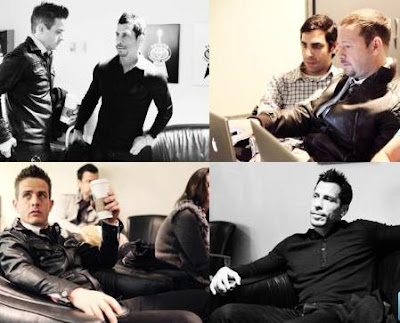 Along with the video, AOL also has an article and several photos. 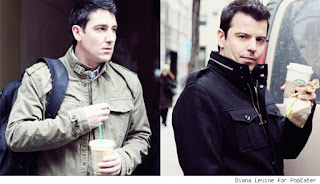 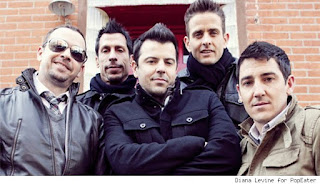 Update: Here is the article:

New Kids on the Block have been in the game for over 20 years, and though Donnie Wahlberg, Danny Wood, Joey McIntyre and brothers Jordan and Jonathan Knight took a long hiatus in the mid-'90s, the group's comeback in 2008 with its latest album, 'The Block,' proved that this boy band was still "hangin' tough."
The guys recently came to New York City to promote their tour documentary, 'Coming Home,' and their upcoming two-night stint at Radio City Music Hall in June. With hordes of dedicated New Kids fans -- many of whom are now well into their 30s -- still camping out days before an appearance, the guys never seem to get tired of the attention they get.
"It's an ongoing fun kind of thing," Jordan tells PopEater. "It's like we play cat and mouse or boy-girl in the playground like when you're little. You know, it doesn't get too old. I'll be honest -- we like their attention as much as they like our attention, so we feed off each other. It keeps it fun."
If you're going to get around New York City with New Kids on the Block, there's no other way to travel than by caravan. Packed into the back seat of a black truck, Donnie, Danny and Jonathan tried to get rid of their "morning show-itis" by cracking jokes, laughing about high school -- Donnie even gave us a bit of lesson in Mandarin, or at least what he remembered from the classroom -- and finally reminiscing about the NKOTB reunion tour. The guys explained that coming back after the long break was a mind-blowing experience and that they didn't expect the positive response they received from the fans. "My legs were like rubber," Danny says about NKOTB's first show in Toronto. "I wasn't prepared to be that nervous."
However, as the New Kids got to each stop on the international tour, it became easier and that energy felt like what they experienced as teenagers. "At our shows, [the fans] really let loose," Danny says. "It's pretty amazing seeing that. It's like a girls' night out."
New Kids on the Block didn't stop there, giving about 2,000 fans the chance to go on a cruise with the group for a few days in May 2009. With the endless cocktails, non-stop club music and access to the band, the fans were able to take their hair down and just party it up. "We're always trying to find new and exciting ways to get together," Joey says. "The idea is to keep it fresh for us. If we're excited about something, the fans will be excited about something. We were a little reticent about getting on a boat with 2,000 people, and it turned out being one of the best things we ever did."
As the guys hopped from interview to interview throughout the day, it's obvious that they still have the same energy as they did when they were teens, perhaps even more. Goofing around whenever they can, they even showed off their love for MTV's hit reality show, 'Jersey Shore,' at every chance they got -- fist pumping in the lobby of the Time and Life Building and even singing the chorus of LMFAO's 'Shots' through the streets of midtown Manhattan. So, what sparked this fascination with pumping one's fist?
"The thing about the fist pumping is it's so goofy," Jordan says. "It's like to let yourself go and do something that goofy is fun, and that's probably why it's so infectious. And ['Shots'] is very obnoxious and perfect for the fist pump."
Despite their funny, energetic and goofy ways, the men of New Kids also have a different side, especially when they talk about their families. For most of the group, fatherhood has not only made them look at getting back into the music business differently but also made them feel whole. "It changes your priorities, how you spend your time trying to figure out, 'OK, how am I going to do what I love to do?" and be there for your family," Joey says. "It's tough. It's a very human thing, to balance work and family. It gives you a lot more perspective in life, makes you a better person, a better artist."
Whether it's giving a show-stopping performance, staying at home with their kids or even just challenging anyone to a fist-pumping battle, New Kids on the Block have come full circle -- and they have no plans of stopping there. With 'Coming Home' on DVD now, the Radio City Music Hall and other gigs on the schedule, as well the second annual NKOTB cruise to the Bahamas, it looks like these Kids have really turned into very fine men who'll never stop pleasing their fans.
"They've been a big part of this reunion," Donnie says. "If the fans want it, we give it to them. We let them dictate."

This, unfortunately, isn't the 2nd part of Day In The Life. It's the one already. NKOTb posted on twitter saying it, yet no one has been able to find it.