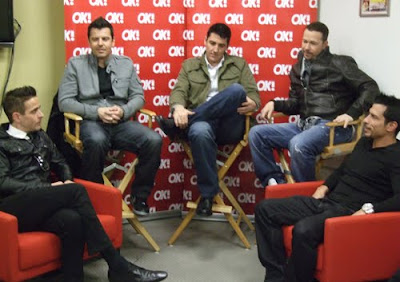 It’s not every day that the heartthrobs of the past and present come together, but here at OK!’s NYC offices, we were lucky enough to be visited by some of the most sigh-inducing, pulse-quickening celebs America has ever seen — both from 20 years ago and today — the New Kids on the Block.
NKOTB — otherwise known as Joey McIntyre, Donnie Wahlberg, Jordan Knight, Jonathan Knight and Danny Wood — made the time last week to sit down with the whole OK! family and chat about their new concert CD, Coming Home, their return to NYC in June at Radio City Music Hall, the Jersey Shore and more. And of course, being the gentlemen that they are, they gracefully posed for tons of pics with all their OK! staff fans!
Have any celebrity fans turn up the live shows?
Jordan: Oh yes. Carrie Underwood’s a big fan our ours. Kelly Clarkson. All the American Idols.
Who’s your favorite person on Jersey Shore?
Donnie and Jordan: DJ Pauly!
What are some of the things you’ve got going right now through Twitter and Facebook?
Donnie: Connecting with our fans first and foremost. We gather information from them and when they want something they tell us and we can respond to their needs and wants immediately. Haiti is a perfect example. We can promote causes like planetohaiti.org right now and we can also promote a record, a project, something that were interested in.
Joey: They know about stuff before we do.
What are some of the craziest fan moments you’ve had over the years?
Jordan: It might have been in Korea. We were checking in at an airport and some fans caught wind of where we were going to be and a whole bunch of fans turned up while we were checking in at the ticket counter. It got so crazy that we had to jump over the counter and get onto the conveyor belt that takes your luggage down and underneath. We ended up underneath with all this luggage stacked up. Nearly got a stamp on our heads.
How was touring with Lady Gaga?
Donnie: She just had a spirit. It’s fun to watch Lady Gaga and RedOne, who produced a lot of her stuff and we also work with. It’s fun to see someone start before anyone really knows who they are. She was always creative and always ticking. She was very down to earth. She co-wrote a couple of songs on our album and she did a duet on On The Block as well. She was just a great girl and now she's a great girl who’s famous.
Jon: I’ll never forget the first day I met her. I didn’t even know who she was and the president of our record company brought her over to a rehearsal. She walked in the room and I thought, “Who is that?” I just assumed she was famous already. She just had that aura about her. I think that she's always had it in her.
Was anything off-limits on the live DVD anything that didn’t make the edit?
Donnie: There’s a segment on the DVD that’s about the cruise. It shows Danny and I, going from cabin to cabin visiting the fans, and there was a girl on there who was in the shower when we came inside the room! It was really funny. I made a note to get a snippet of it in and we didn’t do it. I kinda kicked myself when I watched it last night. Her girlfriend let us in the cabin and was like, “Oh my god, my friend loves you guys. “The friend let us in the bathroom and the girl peeked round the curtain and was like, “Oh my God!” But we ended up chatting for about 10 minutes. Ill get the clip and leak it on YouTube.com. I want it to be seen!
Who’s single right now?
Donnie: Well, there are two married guys in the group and three unmarried guys in the group.
Any more new material in the works?
Jordan: Not in the works, but the door is wide open.
Donnie: We’ve got a few things going on, so when the smoke clears a little bit, it’ll be fun to see what happens.
Interview by Eloise Parker
Posted by NKOTB News at 9:12 AM