Here is a new interview with Joey from OK Magazine

Joey McIntyre stops by the OK! office on Friday, along with his fellow New Kids On The Block Jon Knight, Jordan Knight, Donnie Wahlberg and Danny Wood.

It’s perfect timing, considering his Culture Vulture is in the OK! on newsstands now. Psst … this is what you won’t find in the magazine.

Favorite thing to collect?
Money. No, I’m kidding. I know you’re going to put that down. It’s too late. I let it out now. [laughs] I can’t throw things away. I’m not a pack rat, but I like papers and receipts. Meaningful receipts, like my wife and I’s first date, or a cool dinner with friends. I have receipts from dinners from 10-15 years ago that I can’t let go of. There’s nothing better than going out to eat, and you look at the date, you have the date there, it’s all printed out, you remember what you ate, you remember where you were. It’s fun.

Favorite album?
My favorite album would be U2’s All That You Can’t Leave Behind. That was an amazing album, and for them to be still doing what they do – that was almost ten years ago, that album – but it’s still so fresh. That was a great album.

Favorite movie?
Definitely in my top three is a movie called Midnight Run with Robert De Niro and Charles Grodin. It’s a road movie. It’s hilarious and funny, and it’s got a little bit of everything and a lot of one-liners. That I like.

Here’s a pic of Joey and I: 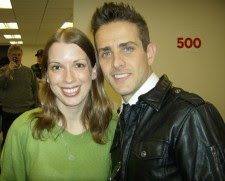 Pick up the OK! on newsstands now for Joey’s Culture Vulture. The cover line is Jennifer Aniston and Brad Pitt/“Yes! They’re Together Again.” Also, check out Joey’s latest solo album, Here We Go Again, which is out now, and New Kids On The Block’s DVD Coming Home, which is in stores Tuesday.
Posted by NKOTB News at 8:08 AM

Fenway Park concert rescheduled for August 6, 2021
NKOTB is scheduled to perform on August 6, 2021 at Fenway Park in Boston.
NKOTB adds another 2021 show
NKOTB to play at Merriweather Post Pavilion on August 4th
Behind the Music with NKOTB
Paramount Plus will be airing a new "Behind the Music" special with NKOTB on August 26!
Joey McIntyre in Las Vegas
Joey and Debbie Gibson will be performing a limited number of shows at The Venetian Resort in Las Vegas August 26-28 and September 16-19.
The Wood Works
Check out Danny Wood's new YouTube series The Wood Works. Episodes post every Tuesday!
Farmhouse Fixer
Jonathan's show "Farmhouse Fixer" is now airing on HGTV and Discovery Plus!