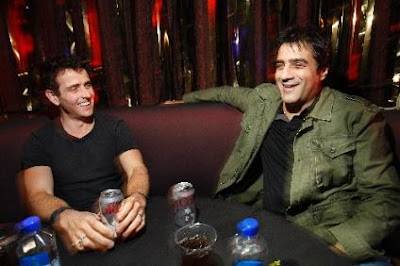 I bet some of you think New Kids on the Block is just a namby-pamby boy band. Well, guess what. They're from Boston, and Boston guys are macho men, and so is New Kid Joey McIntyre.

This weekend, Joey begins a singing residency at the Palms lounge, along with songwriting friend Emanuel Kiriakou.

And when they hang out, this is how manly they sound:

Joey says the New York Jets' victory over the New England Patriots was a hard loss, especially since the Jets did so much trash talking.

"That big tight end -- that moose of a guy for the Patriots -- he dropped the ball. That should have been 7 points instead of 3 points. That changed the game right away. And then ..."

I tell both Joey and Eman I think Pittsburgh will lose the Super Bowl.

"You're talking to a Pittsburgher, bro," Eman flexes, sounding way more intimidating than I expected.

Anyway, Joey and Eman are in a good mood (no matter how much I rag on their football teams), so let's talk about their new Palms gig.

"This whole show is about taking the piss out of each other, basically. That's the plot. The subplot is the music," Joey says.

"We did Eminem and Rihanna's song, 'Love the Way You Lie.' We rapped to each other," Joey says. "The crowd loved it."

They have also sung Tiffany's "I Think We're Alone Now" as a duet. And, naturally, Joey sings some New Kids music, and the pair do songs they've worked on together.

Eman is a busy multi-instrumentalist and an accomplished producer in Los Angeles. He has produced or written songs for Whitney Houston, David Archuleta, Nick Lachey, Clay Aiken, Taylor Hicks and Ashley Tisdale.

Eman and Joey put out a live album several years ago, and they still dig each other's chemistry. They say they're wiser and calmer, with age.

"For a while, I wore the title of (Expletive) With A Heart of Gold.' It was very fitting," Joey says.

"Now, he's just got a heart of gold," Eman says and laughs, busting Joey's chops. "He was never a (expletive) -- all the time. He just had his moments."

Joey used to have a chip on his shoulder, for being the youngest of nine siblings and the youngest New Kid. A long time ago, his approach to working with others was, "These are my crayons, and this is how I want to do it," he says.

But Joey and Eman became parents and mellowed out.

"Having kids definitely grounds you," Joey says. "Also, you get a lot more done when you're a little bit more agreeable."

Eman has experienced shocking sensations with Joey. About eight years ago, they performed New Kids' "Please Don't Go Girl" ballad at the New Orleans House of Blues for the first time, followed by "insane screaming" from fans.

"The eruption scared the (expletive) out of me. I messed up the guitar, because it scared me," Eman says.

These two manly men have been looking to do something like this Palms residency for a while.

"I don't think we're gonna blow it, because we'll be the first to stop a song and say, 'We're blowing it, stop the song,' " Joey says.

They stopped a song in New York recently. It was their first onstage gig together in years. And Eman had decided to start playing Journey's "Faithfully."

However, Eman then realized he didn't know the words.

"It was a train wreck!" Joey says, laughing. "Eman wanted to introduce a whole new storyline -- the second song! -- into the show, eight years after we hadn't performed."

But Joey had his back.

"I had to go along with him," Joey says, "because I didn't want to break his heart."

They vow to know all the songs they'll play at the Palms.

"This is like the Super Bowl, as far as two-man shows in a room like this at the Palms," Joey says.

It's always about football metaphors, isn't it?
Posted by NKOTB News at 6:11 AM