NKOTBSB was also the 17th highest grossing concert of the year according to Billboard. They sold out 22 of their 51 shows, the shows were seen by 609,426 fans and it grossed over $40 Million.


Have yourself a very New Kids Christmas this year with the youngest New Kids On The Block’s newest holiday offering. Joey McIntyre (I always have hard time calling a 38-year-old guy “Joey”) has released “Come Home for Christmas,” his new CD of Christmas standards. From “Jingle Bells” and “Winter Wonderland,” to “O Holy Night” and “O Come All Ye Faithful,” Joe’s CD is a great mix of both secular and religious Christmas songs we all know and love. My favorite is a collaboration with fellow New Kid Jordan Knight on “Peace on Earth/Little Drummer Boy,” the classic duet made famous by Bing Crosby and David Bowie back in 1977. For longtime New Kids fans like me, it’s the closest thing we’ve gotten to a full NKOTB Christmas recording since the group’s 1989 release “Merry, Merry Christmas.”
Looking for a new take on some of the most loved Christmas songs of all-time? Then let Joe “Come Home” to your iPod or CD player this December!

Donnie is trying to get Blue Bloods actress Sami Gayle 5000 Twitter followers. Here is a photo Donnie showing her how to use Twitter: 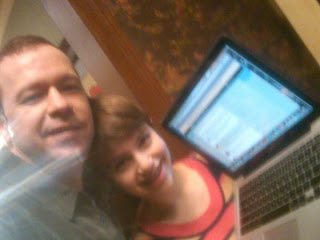