On the set of "2 in the Morning" video 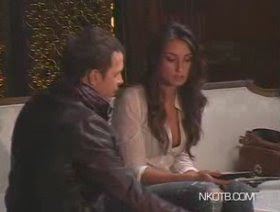 Click here to watch a behind the scenes look at the "2 in the morning" video from People.com

Here is the article that went with it:

A hot girl. A green screen. And loads of hair product. That all adds up to one thing: Another New Kids on the Block music video. In this exclusive behind-the-scenes peek at the group's new video for "2 in the Morning," Danny Wood takes you into a "pretty creepy old house" in the Pacific Palisades where he joined Joey McIntyre, Donnie Wahlberg and Jordan and Jonathan Knight for their latest project. While the video follows the narrative of a feuding couple, don't expect one of the boys to bust out their acting chops. Jokes McIntyre: "We hired big-time actors to do that for us."

Hi Guys.. the video rocks. Luv ya lods and loads loads
- you rock. And Jordan Knight is just the finest - with those "Come to bed eyes". I am going now.. having very naughty thoughts..

whaat, its not just another New Kids video... its a wicked, blindin, new kids video... because you guys are perfectionists and there is nothing that you ever get wrong