Here is an article from Canada.com. Thanks to Tyneda for the link.

The Kids are back 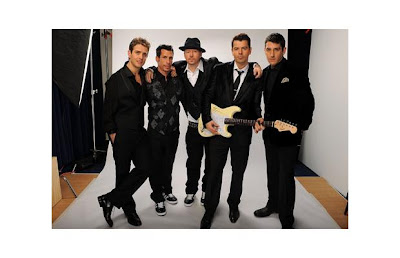 The concept of boys singing and dancing to music written primarily by others was not pioneered by New Kids on the Block. But in terms of cultural impact and historical relevance, it might as well have been.

The Boston-bred group, back together after a 14-year layoff between albums, is widely cited as the pre-eminent teen act of the 1980s. At one point, their audience approval ratings threatened even those of Madonna and Michael Jackson, the era's two biggest pop stars.

The New Kids had danceable tunes, a parent-approved message and good-looking members, which resulted in album sales in the neighbourhood of 80 million copies. For a period of two years, Joey McIntyre, Jordan Knight, Jonathan Knight, Danny Wood and Donnie Wahlberg were stars of the stage and kings of the road, netting $100,000 per gig from merchandise sales alone -- the equivalent of an additional $15 from each ticket holder.

And yet, despite of the group's trail-blazing past, Wood was casually uninterested in talking about the glory days. "It's not like we were frozen in time since 1990," Wood said curtly during an interview with Canwest News Service, in a thick Boston accent.

Wood, 39, might not be the best spokesman for the group. He isn't one of the big three -- Joey, Jordan and Donnie -- nor does he appear to play an integral role in the group. However, a YouTube video finds Wahlberg name-checking Wood as "the soul of the group." Big words indeed coming from Wahlberg, the acknowledged New Kids leader.

Wood, who was unaware of the video, had this to say about his best friend's comment: "I don't know why he said that. But I think it's because I'm the stability. I'm dependable and reliable." Soulful, even.

New Kids on the Block is currently on tour, hitting some Canadian dates. This is the dawning of the age of the New Kids Version 2.0, and Wood, who has four children of his own, said the band is feeling stronger than ever.

"I don't think stamina is an issue. Last week we did five shows in a row, and at one point on this tour we do six in a row. I don't think we even did that back in the day. We don't have no issue with the stamina -- everyone is in good shape. It's more the sacrifice of it. We all have families and kids in school. That's the part that kind of stinks."

Recording sessions in 2008 resulted in The Block, the group's sixth album and first since 1994's Face the Music. It was an immediate success upon its release, hitting No. 1 in Canada and No. 2 south of the border. Times have changed considerably since the New Kids last tasted fame, but the Internet has made things easier, not more difficult, on groups of their ilk, Wood said.

"Last night in the second row, there was this girl who had a button with my face on it and she was crying. She was 16 years old, so obviously someone had to tell her about us. The good thing about how the music industry is now, you can get to people's music really fast. The younger generation might like one of the new songs we have, but they can go back and listen to all our older stuff."

What helped the group back in the day was one of the smartest marketing campaigns in history, a blitz of memorabilia as unnecessary as anything George Lucas has put his name to.

New Kids sleeping bags, dolls, food, clothing -- you name it, Wood and his buddies were on it. Some of it was even too much for the band, Wood said. They won't make the same mistake this time around.

"I always remember this stuffed animal doll that we had," he said. "It was horrific. It was this two-foot tall doll that didn't look like us. It was kind of creepy. We actually got them pulled out of stores when we saw them, that's how bad they were."

Announcing Mixtape Tour 2022
NKOTB is hitting the road with En Vogue, Salt-N-Pepa and Rick Astley May 10-July 23, 2022!
NKOTB on The Kelly Clarkson Show
Check out the video highlights here!
New season of Blue Bloods has started
Catch Donnie Wahlberg every Friday night on CBS
Behind the Music with NKOTB
A new "Behind the Music" special with NKOTB is now airing on Paramount Plus!
The Wood Works
Check out Danny Wood's new YouTube series The Wood Works. Episodes post every Tuesday!
Farmhouse Fixer
Jonathan's show "Farmhouse Fixer" is now airing on HGTV and Discovery Plus!
NKOTB News on Social Media
For breaking news follow "NKOTB News" on social media: Twitter  |  Facebook  |  Instagram