Articles about the House of Blues Concert 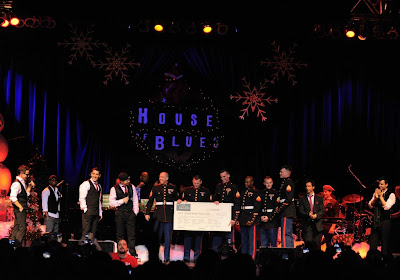 Here are some articles about the House of Blues Concert... Check out my Twitter page for links to videos from the show.

NEW KIDS ON THE BLOCK
BRING THE HOLIDAY CHEER TO BOSTON

NEW YORK – New Kids on the Block brought the holiday cheer to a sold out crowd at Boston’s House of Blues during a special holiday show this past weekend to benefit great Boston’s Toys for Tots. The Boston boys sold out their show within minutes, and with all net proceeds from the event going directly to Toys for Tots, the group raised over 60k instantly. In addition to the monetary donations that poured in, fans filled FIVE plus truckloads of brand new toys to support the charity.

“We’ve said it before, but we can never say it enough, we have the most amazing fans in the world. It is their generosity and dedication that made this all possible,” said Donnie Wahlberg. “Thanks to them, we are able to do what we do and help to give back. 5 truckloads of brand new toys went to Toys for Tots last night!!! The trucks were brimming! It was truly the most incredible sight.”

“Santa who? The New Kids bring more toys than that guy!” exclaimed Sergeant Clint T Schibner of Greater Boston Toys for Tots. Going on, the Sergeant said, “We are absolutely amazed at the sincerity and generosity the New Kids have not only shown Toys for Tots, but more importantly the less fortunate children of the Boston area…their hometown! Marines pride themselves on taking care of their own. The New Kids can take pride in knowing their contribution, as well as their fans’ contributions, will affect the lives of tens of thousands of children in the communities where they grew up, thus, taking care of their own.”

Promising a fun night full of surprises, the group did not disappoint. NKOTB showed some fan appreciation performing hit after hit including classic NKOTB holiday songs that haven’t been performed live in over 15 years! The New Kids pulled out all the stops even bringing local legends Johnny Gill and Ricky Bell from New Edition on stage to sing their joint song “Full Service” from New Kids’ recent album, “The Block.” The Boston boys even debuted their brand new song, “Coming Home” which fans received as a free download when the pre-ordered the band’s upcoming DVD of the same name. Adding more local flavor, NKOTB invited local businessman Ernie Boch to open and even play with them on select songs with his band Ernie and the Automatics. With non-stop action and surprise after surprise, lucky NKOTB fans were certainly treated to a one of a kind evening. 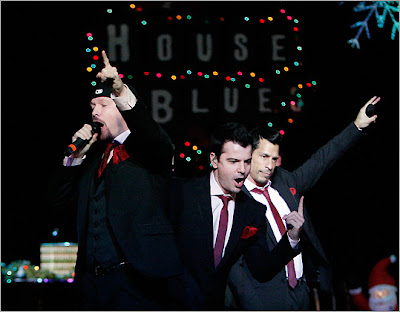 Neither rain, nor snow, nor sleet - nor two canceled flights nor a seven-hour delay, for that matter - was going to keep Amy Stroud and Laurel Mahaney from seeing New Kids on the Block bring down the House of Blues on Sunday. “I said we can’t not do this - we’ve gotta support our boys,’’ said Stroud, 36, as she stood with her friend near the rear of the sold-out room, both of them happily singing along with Jordan Knight as he cavorted to “Dirty Dancing.’’ “I think they love us as much as we love them.’’

With that in mind, both friends, who met at a New Kids show back in the day, braved the weekend blizzard and flew into Boston from their home state of Oklahoma. It was a rough flight, they admitted, but worth every bump. Stroud, who lives in Tulsa, said it was the 20th time she’s caught a New Kids show (including four trips to Boston). “I’ve only seen them 12 times,’’ said Mahaney, 33, who lives in Tahlequah.

Such is the kind of fanatical devotion New Kids on the Block engender more than 20 years after their debut album and more than a year into a highly successful reunion and tour that brought the now-all-grown-up boy band to the House of Blues for a benefit show supporting Toys for Tots. And a show it was - as much glitzy, campy, holiday-themed spectacle (did you expect anything less?) as concert showcasing songs from the Kids’ ’08 comeback album, “The Block.’’

Of course, we got many of the monster hits that, along with NKOTB predecessors New Edition (whose Johnny Gill joined the Kids onstage), helped spawn a generation of boy bands. “Step by Step’’ (cue rapturous screams from the overwhelmingly female audience) and the show-closing “Tonight’’ (cue more rapturous screams) were two particularly giddy trips to the time-machine.

We also got all the preening and wooing, all the choreographed dancing and clowning around, all the cheesy buddy banter among Jordan, Jonathan, Joey, Donnie, and Danny that’s always been at least as important as the music. And yes, they still looked sharp in their tailored suits as they paraded down the stage runway, taking solo turns to croon in the spotlight.

This being the season to be jolly, the boys pulled a handful of holiday nuggets (circa 1989’s “Merry, Merry Christmas’’) from their Santa goodie bag of a set list. De facto bad boy Donnie Wahlberg led a spirited rendition of “Funky, Funky Xmas’’ and jumped from a piano. Jordan, sporting a red and white Santa’s hat, unleashed his heart-melting falsetto on “The Christmas Song.’’ Joey McIntyre got off on the wrong key (“Jesus, you did not give me the right note tonight,’’ he said, gazing up at the rafters) before requesting a do-over and then making like an angelic American Idol on “O Holy Night.’’ The seven-piece gospel choir screamed sincerity. Joey’s sunglasses at night - indoors - did not.

Ernie and the Automatics opened with a set long on covers and genial bar-band blues-rock. Although the band is ostensibly led by auto titan and group namesake Ernie Boch Jr., the presence of guitarist Barry Goudreau and drummer Sib Hashian - both onetime members of the band Boston - was easily the outfit’s biggest selling point, as its medley of Boston hits made clear. 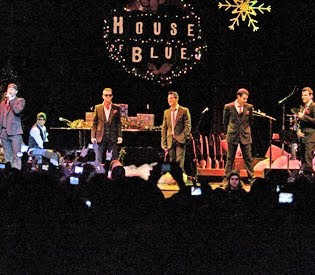 That doesn’t mean the New Kids on the Block can’t use their evil power to spread cheer. Sixty dollars might seem like a steep price to see yet another reunion from the Boston quintet who served as the late 80s/early 90s equivalent of the Jonas Brothers. But net proceeds from Sunday night’s NKOTB concert went to Toys for Tots, and many revelers brought a toy to donate. NKOTB may be exploiting their fans’ nostalgia, but this time, it was to improve the holidays for some underprivileged youngsters. Perhaps NKOTB are on the path to redemption.

By now, some of NKOTB’s original devotees are pushing the age requirement for cougardom. But when the curtain rose on the matching black-suit-outfitted former teen idols, the sold-out room unleashed a collective shriek that could match any response Robert Pattinson’s gotten recently. During some good-natured banter - and after Joey McIntyre admitted to flubbing a verse - Donnie Wahlberg mentioned it was getting moist at the end of the platform into the crowd. He was probably only exaggerating a little.

Of course their music is hammy and dated, and their latest tune, “Coming Home,” is so close to elevator music it barely qualifies as a song. On the plus side, it was sort of cool when two members of New Edition made a surprise appearance. At worse, it was pretty entertaining to watch five guys histrionically prance around as if they were playing street toughs in a Broadway musical.

After the New Editioners ducked out, opening act Ernie and the Automatics backed NKOTB for the second half of the show. Faux snow fell from the ceiling as NKOTB offered up a number from their 1990 Christmas album. Then this Herald scribe scrambled off early to make deadline.

Newer Post Older Post Home
Subscribe to: Post Comments (Atom)
Top Stories
NKOTB in Hawaii
The New Kids on the Block are playing 3 nights in Hawaii on August 5, 6, and 7th!
NKOTB Cruise 2022
Limited cabins are still available for the NKOTB cruise on October 20-24, 2022!
New NKOTB Music
"Bring Back the Time" (BBTT) with EnVogue, Salt-N-Pepa and Rick Astley is out now! Get it here and watch the music video!
NKOTB News on Social Media
For breaking news, follow "NKOTB News" on social media: Twitter  |  Facebook  |  Instagram