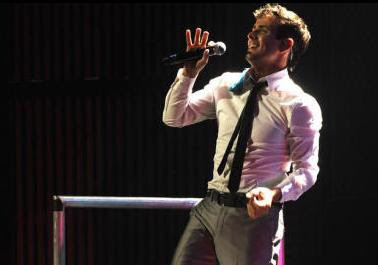 Full disclosure: I was a 12-year-old girl when New Kids on the Block released their monster hit 'Hangin' Tough,' so you'd be wise to take me with a grain of salt when I say that Joey McIntyre was the dreamiest pop singer that ever graced the pages of Tiger Beat. They say you should never meet your heroes, and having chatted with McIntyre shortly before the birth of his new son Rhys Edward, I'm happy to say they're wrong. The one-time New Kid was every bit as charming and sweet as a 12-year-old could dream, and I was thrilled to get the inside scoop on McIntyre's brand-new album 'Here We Go Again,' his brand-new family addition, and how he feels about his career post-NKOTB. Read our exclusive interview after the jump.


I know you hear this on a daily basis, but I was a huge New Kids fan.

I think this is fairly sophisticated for a twelve-year-old: I was going to wait until you weren't popular anymore and five million screaming girls weren't competing for your attention, then make my move... even if it took decades. You ruined it by staying active in the industry for your entire adult life.

[Laughs] Wow. I never got too pathetic? You really schemed that out, like "I'll wait 'til no one wants him."

Really good. Hey, I was close. Here's the deal though, when I was pathetic, when I was unwanted, you were flying high.

Then, by the time you remembered to think, 'I wonder what Joe's doing,' I'd already come back.

Bad for me, good for you. But really, you have been working consistently for years, if not always where your original, mainstream audience could see you. So I think the choice to do 'Dancing With the Stars' in its first season was pretty bold. On network TV with no real idea of what to expect.

That's the risk. I had cold sweats about that, literally in bed going, "What am I doing?" Since New Kids, before ['DWTS'], I had a top ten single on my own, I had done a lot on MTV, I did a season on 'Boston Public' as a regular and I was on Broadway in 'Wicked' when it was huge. I did all these things, so that's why it was so hard for me to do a reality show. But it made me think - "It is music, it is dance. I'm going to learn from these peeople."

I was at a place where, I'd just come off Broadway, and I was antsy. In a perfect world, I would have been doing another TV show, but the situation came up. To be honest, it wasn't a decision where I was like, "Yeah! This is going to be cool!"

The show turned out to be a big deal. Are you glad you did it?

It's different now. Part of me wishes we had a results night - you know, it was six episodes. In that first season, you could kick ass on the third episode - but you weren't getting judged on the third episode. You were getting voted on the second show, the last show. It was really complicated, and you see the way it is now with the perfect format. I was able to go on a few tours with them and sing some songs - overall, it was a win situation.

So you would rather have done it during a later season?

Yeah. You don't get any points for being a leader. [Laughs] You don't hear Joey Fatone saying, "I want to thank Joe McIntyre for launching this show." But not to be corny - I like being a leader, I like to do things that are new and try things. It's great entertainment. It's great for the whole family, there's not a lot of TV like that. And those dancers are amazing.

Your wife is about to give birth - you must be over the moon.

Yes. Our son just turned two and he's the greatest. I just had to watch him get his first stitches yesterday. Oh man. Whatever doesn't kill you makes you stronger - but that killed me. He's the best, and we're going to have two boys running around. I'm very, very, very fortunate.

Is there anything you're going to do differently with your new son?

I see my wife and how amazing she is, and how giving, how loving - it's just over the top. I watch that and go - "Can you imagine? You're going to have just as much love for someone else?" But you find the love. There's no end to finding the energy and the love. We're going to have a great time.

Given that you've been so active professionally - you have a new album out right now - I was pleasantly surprised that you chose to do a New Kids reunion. It's not something you see that often - Justin Timberlake isn't running back to hook up with 'N Sync. What went into that decision for you?

I think the process was tough at times for me. I am my own artist, we have five different strong personalities - very talented - but the cool thing is that when you have those five people with a lot to offer and you can communicate, great things happen. We were able to put together a really great reunion. All that being said, our fans stepped up before we even did anything. They made everything so much easier. The experience was awesome. The timing has to be right, and the timing was right for everybody. We definitely made the most of it.

We'd have pockets in the crowd of three or four teenage girls, and it would be hilarious. Sometimes they'd be, like, losing their sh-- like you did when you were 12.

I listened to your new single, 'Here We Go Again,' and it's very stylish, very rhythmic. Is this the sound for the whole EP?

Yeah. The direction started with an attitude. When I started to get itchy to write again, make some music, I heard a lot of no. No, you're wasting your time, look at the business, it's so hard, why do it, blah blah blah. All those things, and I think that angst and that energy drove the music. I think that's why it's very in-your-face and up tempo. I was able to find a producing and songwriting team that I wrote this music with, and we hit it off. We just wanted to kinda rock out and kick ass.
Posted by NKOTB News at 8:29 AM