McIntyre and mates look forward to House of Blues

Joey was interviewed by the Boston Globe:

Rockin’ with the Kids
McIntyre and mates look forward to House of Blues - and beyond
By Sarah Rodman, Globe Staff | December 18, 2009 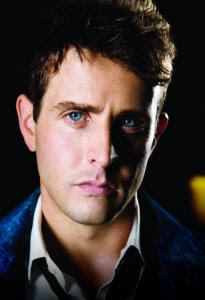 Joey McIntyre is on the phone promising that the New Kids on the Block show on Sunday at the House of Blues will hew toward traditional New England holiday rituals. ‘‘We’re going to have a harp. We’re going to have bonnets on and muffs. It’s a Pilgrim Christmas,’’ he says with a chuckle. Of course, the youngest member of the recently reunited boy band is kidding. They may have rocked pegged pants in the ’80s, but there’s no way McIntyre, 36, and his brothers in synchronized choreography — Donnie Wahlberg, Danny Wood, and Jordan and Jonathan Knight — would be caught dead in a muff. The sold-out show, a benefit for Toys for Tots, will be the last stand in the reunion for now as each Kid returns to solo pursuits. When we chatted with McIntyre, he was excited to talk about his new seven-song iTunes EP, an uptempo pop affair called ‘‘Here We Go Again,’’ but even more jazzed about the arrival of his second child, another son, born Sunday. After a few weeks on diaper duty with his wife, Barrett, McIntyre will return to the Hub on Jan. 14 for a solo show at the Paradise.

Q. So what’s the story with Sunday’s show?

A. We’re going to have a party; there’s no way around it. But there’s going to be a genuine performance too. Maybe do a couple of the hits and some Christmas songs and really just be together and have a good time and raise a lot of money for Toys for Tots.

Q. It’s been six months since the tour ended. With the benefit of a little hindsight, how do you feel the reunion went?

A. To just be a part of that experience was beyond any of our imaginations. It was amazing. Personally, I’m an intense guy so sometimes that was interesting. (Laughs.) You have five different personalities. I love these guys, they’re my brothers, but I am my own artist at the same time. So sometimes that was difficult to navigate for me. And I know it’s crazy because you think, Joe, what are you worried about? It’s nothing but success.

Q. I would imagine since you’re all grown men now with separate lives, coming back together for such a long stretch probably was great fun some days and probably felt like a big mistake on other days. And you all have actual brothers, too, so it’s not like you need more family.

A. Yeah, exactly. (Laughs.) And I’m the pipsqueak little brother. Everybody else gets along fine except for me. But that being said, we all have a great time and we get on the conference calls and we [chat] and have a lot of laughs and everything’s cool. And we’re thrilled about the stuff we get to do. We ordered up another cruise in May.

Q. Were you on the first one for the whole time or did you get whisked on and off by helicopter?

A. No, no, we were on it the whole time. You’d think, OK, 2,000 girls, where the hell are you going to go? But they didn’t feel the need to chase you around, because you were on the boat. So it was like, Hey, how you doing? See you on the lido deck in two hours. (Laughs.) It was all totally cool.

Q. When did you start thinking you wanted to do a solo thing again?

A. On the second or third leg of the New Kids tour when we were in Europe I started getting mad. I get mad because I hear all the nos: “No, you can’t do it because of this.’’ “Look at the state of the music business - who’s going to want it?’’ “You’re wasting your time.’’ “You’re not good enough.’’ All those cliché things. So I knew I was getting itchy, but I didn’t know how I was going to do it. As soon as I came off the road I went right into the studio, and I was lucky enough to team up with three guys, a production and songwriting team [Brent Paschke, Drew Ryan Scott, and Gabe Lopez]. We wrote all these songs, and I think that angst is in the music. “Here We Go Again’’ is about getting back in the fight and staying in there. It’s honest, but it’s cool at the same time, and that’s the idea, to be honest.

Q. For the solo tour will you have a full band or play to tracks?

A. It’s going to be a band; it’s going to be full-blown. I could’ve done seven songs to tracks with some dancers and signed some autographs, but I decided to rock and roll and do it the right way, or the way I think it should be done.

Q. Have you guys talked about making another record and keeping the New Kids reunion going?

A. I don’t think we’re going to be making music too soon. We’ve got a couple of things on the horizon. We want to do stuff that’s cool and that we’re excited about and that we think the fans would be excited about, like the House of Blues date and the cruise. What we were able to experience and have with the fans is really cool, so we’re not going to blow it.

Sarah Rodman can be reached at srodman@globe.com
Posted by NKOTB News at 7:08 PM