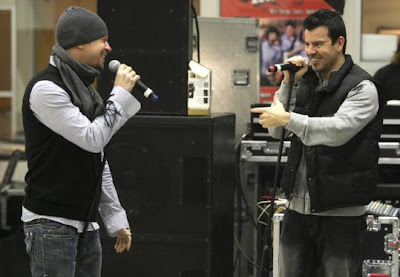 Two of the New Kids on the Block were in Norwood last night putting the finishing touches on the group’s sold-out benefit show for Toys for Tots, which will be held Sunday night at the House of Blues. Car magnate Ernie Boch, whose band Ernie and the Automatics will open Sunday’s show, gave his private hangar space at the airport to the New Kids so that they could practice their moves. The only Kids at the airport last night were Donnie Wahlberg and Jordan Knight. Among the missing was Joey McIntyre, whose wife just had a baby a few days ago. There’s no official word on where the Kids will be between now and Sunday, but we have some guesses. Wahlberg’s protege, hip-hop artist Jimmy Marsh, has a gig at Vintage lounge on Broad Street on Friday night. The poster for the party says that Marsh will welcome a “special invited guest’’ during the event. It’s a good bet that Donnie is the special guest in question, right? The “Christmas With Jimmy Marsh’’ party starts at 11 p.m. Meanwhile, Rob Lewis, of MTV’s “Making His Band,’’ has a gig at 10 on Saturday night at Oliver’s at the Cask ’N Flagon. Lewis has been the keyboardist on the New Kids tour and advertises on the poster for his Saturday show that “surprise special guests have been invited.’’ Sounds promising.
Posted by NKOTB News at 9:26 AM