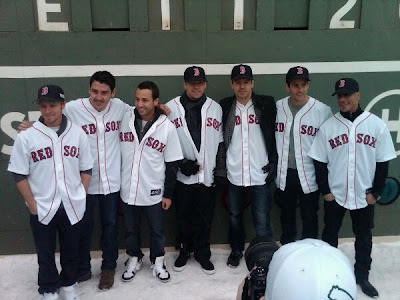 Here is an article that was posted at nkotb.com that gives all the info about on-sale dates for the Fenway show and the re-scheduled Nassau Coliseum concert, plus the announcement of even more shows!

BOSTON, MA – After weeks of speculation, New Kids on the Block and Backstreet Boys joined the legendary Green Monster today at historic Fenway Park to announce a special once in a lifetime performance at the legendary Boston ballpark on Saturday, June 11th. The superstar groups join the exclusive ranks of musical greats Paul McCartney, Bruce Springsteen, Neil Diamond, Jimmy Buffett, Dave Matthews Band, Phish and Aerosmith who have all performed on the field of the world famous ballpark. Fenway tickets go on sale to the public on Saturday, February 5th at 10am EST at etix.com and LiveNation.com or by calling 800-514-3849 TICKETS WILL NOT BE AVAILABLE AT THE FENWAY PARK TICKET OFFICE. Block Nation presale will begin on Thursday, January 27th at 10am PST. AMEX presale will begin on Friday, January 28th at 10am EST.

“This is a tremendous honor for us. As a group of South Boston kids we never thought we would get an opportunity like this. Our dreams are coming true,” said New Kids’ Donnie Wahlberg. “And one of the best parts is that we get to share this moment with our friends the Backstreet Boys.”

“We are all so grateful and excited to have this opportunity. It’s a once in a lifetime moment. And to get to experience this with our Boston friends NKOTB puts it on a whole other level.” Added the members of Backstreet Boys.

In order to accommodate this prestigious once in a lifetime event, NKOTBSB have moved their Nassau Coliseum show, originally scheduled for Saturday, June 11th to Sunday, July 31st. All June 11th tickets will be honored at the July 31st show or full refunds will be available at the point of purchase if necessary.

The Fenway announcement is part of the highly anticipated NKOTBSB tour, produced by Live Nation, set to begin on June 2nd with sold out shows opening night at the Mohegan Sun Arena in Uncasville and Boston’s own TD Garden, as well as, sold out shows in Philadelphia, Toronto, New York, New Jersey, Chicago and Los Angeles. With the continued and insatiable fan demand, the unstoppable phenomenon that is the NKOTBSB will add a slew of new dates to their tour including a third New York area show, a third Chicago area show and additional stops in Grand Rapids, MI; Buffalo, NY; Baltimore, MD; Ottawa, ON; Montreal, QC; Hamilton and London, ON. Further information concerning these shows, including dates and venues, to be announced shortly.

The announcement of the Fenway Park show and the upcoming announcement of even more new tour dates will bring the historic NKOTBSB tour to over 50 stops, giving fans across North America more chances to catch their favorite groups on one stage. Further ticket and tour information for all dates is available at NKOTBSB.com, etix.com and LiveNation.com.

"We are very pleased that we are able to bring together New Kids On The Block, The Backstreet Boys and their New England fans at Fenway Park. This will be an unforgettable night for us all,” said Dave Marsden, Vice President of Booking for Live Nation New England.

NKOTBSB’s Fenway Park announcement comes just after their epic performance on “Dick Clark’s New Year’s Rockin’ Eve with Ryan Seacrest 2011.” NKOTBSB sent thousands of screaming and dancing fans into a fan frenzy. With throngs of fans in the middle of Times Square singing along to their smash hit singles, and millions more tuning in from home, New Kids on the Block and Backstreet Boys once again reaffirmed their place in pop culture proving why their ticket is the hottest ticket of the summer.

NKOTBSB first shocked and delighted fans when they took the stage together for a medley at the sold out NKOTB Radio City Music Hall show. The two groups wowed audiences again in their first joint televised performance at the American Music Awards this past November. The performers had the audience on their feet when they unleashed hit after hit including Backstreet’s “I Want It That Way” and NKOTB’s “Hangin’ Tough,” sending the crowd into rip-roaring applause.

With over 200 million albums sold between both bands, and smash hit after smash hit, these two pop sensations have dominated the music scene for over three decades. Aiming to please, these guys are giving concert goers and diehard fans everywhere the ultimate “night out” experience.