Here is an article from the Boston Globe about the NKOTBSB Fenway show: 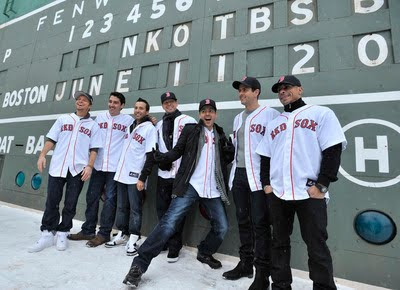 New Kids on the Block made it official today. The Boston-bred boy band will be strutting their stuff in centerfield this summer when they join Backstreet Boys for one night, and maybe more, at friendly Fenway. Wearing Red Sox jerseys and joking that they're now official members of the Olde Towne Team, Donnie Wahlberg, Joey McIntyre, Danny Wood, and Jordan and Jonathan Knight confirmed what's been rumored for awhile: Following in the footsteps of the Rolling Stones, Bruce Springsteen, the Police, Dave Matthews, and Aerosmith, among others, NKOTBSB will perform at Fenway June 11. (The ballpark has permits for a show June 12, too, and the boys bands have a sold-out show at TD Garden June 4.) "We've been walking around downstairs just sort of overwhelmed," said Wahlberg, who took a break from filming his TV show "Blue Bloods" in New York to be at today's Fenway press conference. "I'm kind of starstruck to meet Larry (Lucchino). I was looking for Theo (Epstein), but I couldn't find him." Joining NKOTB were Backstreet Boys Howie Dorough and Brian Littrell, who said it'll be an "honor and a thrill" to perform at Fenway with the New Kids. "Every little boy on a field somewhere dreams about playing at this park," said Littrell. "Mom, we made it!" (He added that his Backstreet bandmate A.J. McLean, who recently checked himself into rehab, is doing well.) The Fenway show is part of longer tour for the two bands, and there seems to be genuine camaraderie between the crews. Huddled in a suite overlooking the snow-covered field after today's announcement, the bands promised a no-holds-barred spectacle this summer. "We're going to pull out all the stops," said Donnie. While New Kids have played to packed stadiums all over the world, Joey Mac said it'll be a special treat to play at fabled Fenway. Is he intimidated that some of the biggest bands in the music business have played there? "A bunch of nobodies," he said with a smile. 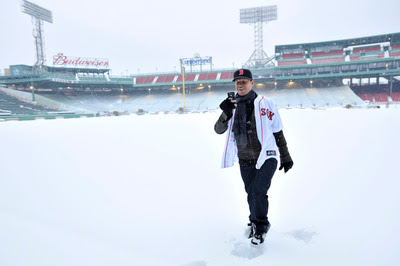