Donnie recently did a photo shoot for CBS's Watch Magazine. Here are some photos: 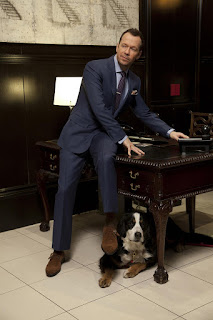 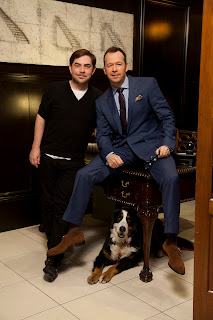 The Boston Globe has posted a short article about Jordan's involvement with Dancing For Hope:

New Kid on the Block Jordan Knight helped raise $95,000 for St. Mary’s Center for Women and Children in Dorchester at the fourth annual Dancing for Hope benefit over the weekend. The party, which drew about 500 guests (including City Councilor Tito Jackson, who helped emcee), was held at Club Royale and was chaired by Evelyn Knight and Jill Hayes.

Here is a short video of Jordan on stage at the event:

The Boston Globe also posted a short article about Donnie about his busy week:

It’s been a busy week for multi-tasker Donnie Wahlberg. The star of CBS’s “Blue Bloods” — who’s also executive producing TNT’s new drama “Boston’s Finest” and preparing for a summer tour with New Kids on the Block — was in town over the weekend for a photo shoot at XV Beacon (below) that will appear in CBS Watch magazine. He was joined for the shoot by Heidi, the Bernese mountain dog that belongs to XV Beacon’s general manager, Amy Finsilver. By Monday, Wahlberg was already back in New York. He tweeted Monday afternoon, “Wrapped #BlueBloods for the day! Off to . . . brainstorm for #ThePackageTour. Then to @TheDailyShow with Jon Stewart!” The guy is productive.

‘Blue Bloods’ star Donnie Wahlberg suited up in Ralph Lauren’s fancy-shmancy Black Label collection at XV Beacon the other day for a fashion spread for ‘CBS Watch!’ maggie. Joining the TV cop for the shoot for the September mag were editor Jeremy Murphy and Heidi, the Bernese mountain dog, whose mistress is the hotel’s GM Amy Finsilver. File Under: Boston’s Finest

Donnie, Seth Jarret and Julie Jarrett and some of the real life Boston Police Officers were interviewed by Dirty Water TV at the premiere of Boston's Finest.  Here is the video clip:

In case you missed it... Other news from today:

Reminders:
Tomorrow is the premiere of Boston's Finest on TNT, and Donnie will be on the Today Show tomorrow morning.
Posted by NKOTB News at 9:33 PM