Jay Towers interviewed Joey about his role in the movie "The Heat", The Boston Marathon, NKOTB shows and more. Here is the video:

Update: Interview has been deleted, does anyone have it saved?

Joey and Jonathan were interviewed by Tony Stark on Virgin 96 in Montreal. They talk about Instagram, being in a group versus being a solo act, where do the like to go on vacation, being an original "boy band", Boston Strong, tips on writing a love song and more.
Update: Interview has been deleted, does anyone have it saved?

The New Kids on the Block will be featured on E!'s Inside Track Summer Concert Series and will feature footage from their Detroit concert. According to the Hollywood Reporter, "each segment will showcase an exclusive interview, behind-the-scenes access to the prep work that goes into the tour, tour bus access, meet and greets with fans and concert footage." No word yet for the exact air date.

Some celebrities have attended some of the recent shows and after parties including, Joey Fatone, Amy Carlson and K7 TKA.

It looks like there will an after party at PURE Nightclub inside Caesars Palace after their show in Las Vegas on July 6. Click here for more info.

The guys visited Seacrest Studios at The Children's Hospital of Philadelphia on Saturday. Check out a photo below. 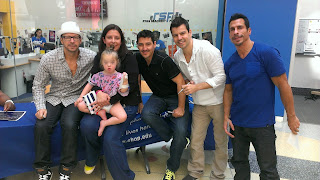 Some fans are putting together a special surprise for Donnie's birthday. Check out @HappyBirthdayDW on Twitter for more info.

BC TV interviewed fans at the show in Brooklyn.