I will probably write a more detailed post later about Joey at Carnegie Hall after I return home, and I can make a post on my computer instead of my phone. Until then, here’s a few updates!

Joey had several special guests join him on stage at Carnegie, including Shoshana Bean, Debbie Gibson, Eman, and of course all the members of the New Kids on the Block! Just to name a few!

Here is a photo that Donnie shared on Instagram 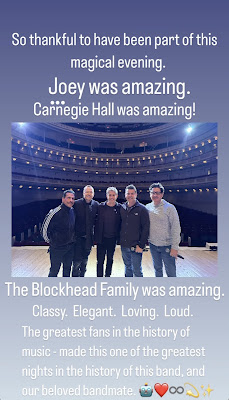 Here are some links to some videos from the show!

TheJeanJacketGirls (there are a few clips on their page)

Jill’s video of the NKOTB part of the show

After the show, there was an after party before the after party. Live Nation posted a video here!

Here’s a short clip that Donnie shared on his Instagram stories:


After that, Joey and Jonathan went to the after party at Haswell Greens. Joey gave a speech and announced he wants to do 50 shows in 2023! Click here for a video clip from joestwistedchicks!

This morning, Joey hosted a question and answer session at his VIP breakfast! Click here for videos!