The Boston Herald has an article about Donnie helping a fan find a kidney donor. Here is the article: 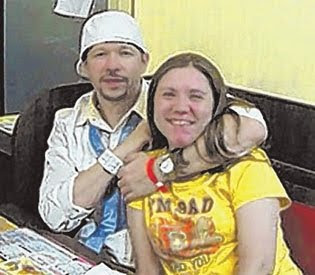 Photo by Abbie Vicknair
Self-proclaimed “Twitter-aholic” Donnie Wahlberg doles out daily inspiration and gives a lot of “twugs” to his 183,000-plus followers, but he never thought he’d help find a NKOTB fan a kidney!

“Basically, a few of my Twitter followers retweeted a blog (called ‘Love Can Do Anything’) about a fan named Bobbette who was in desperate need of a kidney transplant,” he told the Track — in more than 140 characters. “So I saw the tweet, read the link and then retweeted and asked for help.”

The Twitter APB back in December reached thousands of NKOTB fans and prompted a flood of calls to Vanderbilt University Medical Center that yielded six matches for Bobbette Miller, her BFF Abbie Vicknair told the Track. Turns out, one of the Twitter Six had the Right Stuff so the Nashville gal is scheduled for a transplant in June!

Until then, the girl’s Hangin’ Tough!

“Back when we found out Bobbette needed a transplant, her kidney was functioning around 20 percent,” said Vicknair aka @abbielicious613. “I knew I had to reach a lot of people in the fastest way possible, so I posted the blog on Twitter. And within two hours, I saw that Donnie retweeted the link. I stopped dead when I read it. I couldn’t believe he did it.”

In fact, Abbie said she joined the popular social networking site three years ago because she heard that @donniewahlberg engaged with fans via the Twitterverse.

“I figured, ‘Oh, this will be fun for a couple of months,’” she laughed. “And then Donnie helped save my friend’s life.”

Wahlberg, who we caught up with during a break in rehearsals for the upcoming NKOTBSB tour, brushed off the good deed and said it was a “team effort” that found Miller her kidney.

“It’s a testament to the value of Twitter when used for more than telling people what one is eating for dinner or using it to sell products by tweeting as an #endorser,” he told us.

File Under: New Kid(ney) on the Block?
Posted by NKOTB News at 3:57 PM