In a recent interview with MTV, Mark Wahlberg says they are planning an Internet-based reality show about running the upcoming Wahlburger's restaurant. Here's the quote:

And, about those hamburgers, Wahlberg told us that not only is he deadly, deliciously serious about opening a patty joint with his brothers called Wahlburgers, but they're also planning to shoot an Internet-based reality show about the effort.

"Listen, when I told the story that I wanted to do a show about a movie star and his five friends running around Hollywood, everybody said it was the dumbest idea in the world," Wahlberg said of his "Entourage" success. "My brother is a five-star chef. So it's a family-run business. You're going to see us doing a reality show about building the business. This is the real deal. We'll throw it up there and see if it sticks."

Don't forget Donnie will be on Rachael Ray's show tomorrow. There is a preview clip on The Rachael Ray Show Website. 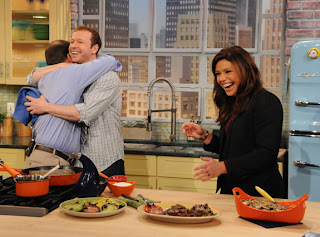