Here is an interview with the New Kids on the Block from the Victoria Times Colonist: 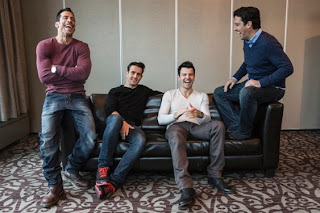 But he says it's also not indicative of the upcoming stadium performances that will bring them to Canada in June and July.

During a visit to Toronto, Knight admits he's long battled anxiety issues and that it continues to dog him today.

But he says it's not as serious as it once was, insisting the New York meltdown had more to do with lack of sleep and problems with his "day job" as a real estate broker. It's a career he started when he retreated from the limelight after the group disbanded in 1994.

McIntyre, Knight and fellow members Jordan Knight and Danny Wood were in Toronto to promote their new album "10" and an upcoming tour with Boyz II Men and 98 Degrees. A publicist said fifth member Donnie Wahlberg was tied up with work on his CBS series "Blue Bloods."

The Canadian Press spoke with McIntyre and Jonathan Knight on Saturday about hangin' tough on tour, a new album and couch-surfing at the homes of fans.

Is it surreal to be promoting new material and starting an arena tour some 25 years after you started? I think a lot of people doubted you'd be at it this long.

The band is getting good reviews for the new album "10," do you credit that to a newfound confidence and maturity?

Joey McIntyre: There's lots of little lessons and things to smile at when you look back and being together for this long.... We went through that period where we wanted probably not to be teenagers anymore — we wanted to do grown-up stuff and we probably took a couple of hits because we were so young and critics probably got on us because of the merchandise and the hysteria and all that stuff. All that stuff is fun but like I said you want to sort of grow out of it but you can't because you are what you are. But now because our fans were so young back then, they're still in their 30s now and even though we're doing this a second time it still feels like we're in the prime of our lives, in the prime of our careers. It's just cool to get a chance to make those albums, make those albums that are more mature and fit us a little bit better than some of the other ones.

It probably helped to pull back from the limelight in the mid-90s and pursue individual projects before regrouping in 2008. It was during that time that Jonathan revealed his struggle with anxiety. After that recent show in New York people wondered: Is it still an issue?

JK: It's not as much of an issue as it was. That was just a bad week. A bad week. I didn't sleep and just was like aggravated with stuff going on back at work. It just built up and that was it.

You mean work in the real estate business?

Is it difficult to separate those two parts of your life?

JM (interrupting): That show wasn't our finest moment. Aside from whatever Jon was experiencing, sometimes we wing it and sometimes we have fun and that's OK but we winged the hell out of that show. And it didn't have a structure and a form and so I really don't think Jon would have done that in an arena show or, you know, in a lot of other shows. I think sometimes each of us want to leave the stage and it was just one of those things.... And then a day later we went to San Francisco, we went to Napa Valley of all places, and we did two acoustic sets that were probably the most intimate we've ever done and as a group, not just Jon, because we all have fears, you know what I mean? Of wanting to grow and do new stuff as a group and I think that was a little bit part of it.

I'm sure it was a lot worse for you guys than it actually seemed for fans. Jon, what was going through your mind while you were on stage at the time?

JK (smiling): Are there any cabs?

JK: Even before the show started. I just hate that whole show. I've always hated (it).

What do you mean?

JK: I like to know what's coming my way. Always have. In everything I do. I need structure.

There was a report that you took a phone call during the set. Did someone call your cell?

JK: No! I was looking at the lyrics.

JM: I'd been doing that the whole time, too. The first week of the album I kept (looking at my phone) and actually I forgot the words at one point, even after looking at them!

JK: That's a stress in itself right there — doing a new album and trying to remember the words.

How do you keep connected to fans after all these years?

JM: Jon takes fans to dinner, like, constantly. Sometimes he takes "Joe girls" to dinner and I get mad. There's "Jon girls" and "Joe girls" and recently he tweeted a picture of him and a "Joe girl" at dinner and he tried to make me jealous. And I was. But that's literally how close it is.

How does that happen?

JK: We were in Napa the other day and there were five or six of them. I was hungry, I was like, 'Let's go get dinner.' It's the social media age, we've always been very close to our (fans) and I think that we're very approachable people. But I just think Twitter has brought it even closer — I mean, at 3 o'clock in the morning my fans are right here on my iPhone and can communicate. I think it's cool. I've been to fans' houses and slept on their couch. (I'll say), 'I'm coming up to Toronto, get your couch ready.'

Wow. When was that?

JK: That was like two months ago, I came up here for three days.

So that was a personal visit?

JK: Yeah. I pop in and out of places.

So was that a fan or a friend?

JK: A fan. But I have a new term — there's a lot of fans that I know really well so I call them "frans."

JM: Frans? I don't love that. I'm a pun guy and I don't like that one but I understand. It's hard. I don't like to say fans either, really. Because it's more than that. We're lucky to have supporters. We used to just call them "supporters" but then that sounds like a support group. Which it is sometimes.

This interview has been edited and condensed.
Posted by NKOTB News at 2:23 PM