Better Late Than Never Series: Joey McIntyre in A Funny Thing Happened on the Way to the Forum

As Joey is gearing up for his role in The Wanderer, it reminded me of some of his other roles. Joey was in the production of "A Funny Thing Happened on the Way to the Forum" at the Garry Marshall Theatre in Burbank, CA from November 22-December 10, 2017. Here is Joey's announcement about him joining the cast:

Here are a couple photos of Joey and cast members: 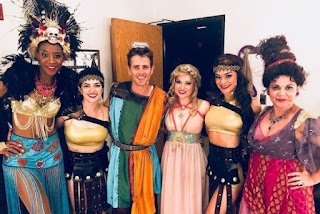 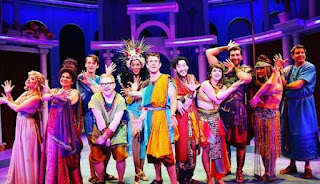 Here is a clip of Joey encouraging people to see the show:

Here are a few other links!

Review, plot summary and photos from the play from StageSceneLA

Here is an interview Joey did from Billboard:

If you cruise down Riverside Drive in Burbank, Calif., you can’t help but notice the marquee in front of the newly renamed Garry Marshall Theatre (rechristened this year to honor his memory). Beneath the title of the current show, A Funny Thing Happened on the Way to the Forum, is the leading man’s name: Joey McIntyre — and the news that he is only in the show as Pseudolus for three weeks (with his run ending Dec. 10 when original cast member Paul C. Vogt returns from playing Amos Hart in an international tour of Chicago).

McIntyre starred in the film adaptations of the musicals The Fantasticks and Tony n’ Tina’s Wedding. His stage musical credits include Tick, Tick…BOOM! and Wicked. The New Kid on the Block talked to Billboard about his earliest musical theater memories, going from pop music to Stephen Sondheim and if more stage work is in his future.

What is your earliest memory of musical theater?

Coincidentally, my earliest memory of the theater was A Funny Thing Happened on the Way to the Forum. I lived four blocks from the Footlight Club, the oldest community theater in America. It’s a beautiful 250-seat theater in Jamaica Plain [Massachusetts]. My mother and sister were in the show. The actor who played Pseudolus had this can of peanuts, and when he opened it, snakes would jump out. My friend and I would sit in the front row. My first job in theater was to collect the snakes.

You joined New Kids on the Block when you were 12. Before that, did you have a chance to appear in any musicals?

Theater has been so important to me and my family over the years. Mom performed in church and at the Footlight. Dad came up in Boston politics and that can be a song and dance show. I love sports but I grew up in the theater, starting at age six. I learned about music by being on stage. I was in shows like Oliver! and The Music Man. There’s nothing but joy in the theater. There’s an openness to everything. Historically, the gay community has always been very involved in theater and as a kid you notice that people can be what they want to be. There’s a warmth in the theater. Then you sing a song and people clap for you. What’s better than that?

You’ve appeared at the Garry Marshall Theatre before, in 2006 when it was known as the Falcon Theatre. What was it like to work with Garry when you were starring in his stage production of Happy Days?

It was really a joy. He created Happy Days and I watched that show when I was growing up. There’s nothing cooler than the Fonz and Richie Cunningham. To play the Fonz and work with this legend who did everything from Dick Van Dyke to Pretty Woman was like a master class. Garry was a sweetheart and his spirit is still alive in his theater. He was a regular human guy and he opened up to me about the ups and downs of life. Everyone who worked in that theater had a connection with him.

Paul C. Vogt, who is playing Pseudolus in this current production of Forum, had to step out of the show for three weeks and you were asked to step in. How did that come about?

When I first saw the line-up of shows for the current season, I texted Joe [Joseph Leo Bwarie, director of Forum] and told him I would have auditioned for the role. Then Paul stepped out and Joe called me and asked if I could learn the show in two weeks. It was a tall order but I took the challenge. It was a chance to learn and grow.

What is it like to go from pop music to Stephen Sondheim?

Sondheim is complicated. Every syllable, every idea is connected to something else. Any songwriter could learn a lot from Sondheim. Lin-Manuel Miranda is a huge fan. The way he wrote Hamilton, with his pop background, he emulated Sondheim. I’ve always enjoyed interpreting songs. Most of the time, pop singers are going for the acrobatics, which isn’t my forte. I’m confident about how I deliver a song. I’ve never been bashful about tying emotion to the song.

What is your favorite moment in Forum?

I get to sing the opening song with the company [“Comedy Tonight”]. Then I sing “Free.” Pseudolus is a slave who wants to be free. It’s a great song and it kicks off his trajectory, his arc. I also love singing “Pretty Little Picture.” It’s early Sondheim with such descriptive lyrics: “In the ocean an island waits, smooth and sandy and pink, filled with lemons and nuts and dates.”

I’m working with a great cast, we have a beautiful set and the costumes are gorgeous. I’ve been touring with New Kids a lot, so I haven’t done much theater lately. It’s wonderful doing something again and again. You ask yourself, that worked last night, why not tonight? You can try things out, just being in the moment. You try different techniques. You swing and sometimes you miss, but when you hit a home run in the theater, it’s electric.

Do you want to do more theater?

I think so. I’m moving to New York. I put that out in the universe, so it’s not a coincidence I’m doing a musical before I head back. I want to be in that world again. I’ve driven down Beverly Boulevard [in Los Angeles] enough.