Donnie will be on BBC 2 radio tomorrow! He also retweeted this post by a fan who is hoping to see the guys in the UK soon... I'm thinking since he retweeted that, it is a good sign for the UK fans!

Even though Blue Bloods is done filming, Donnie has still been busy. He was spotted at last Saturday's matinee of The Wanderer, he recently completed filming season 4 of "Very Scary People" (which starts airing in June) and he attended the Celtics vs Bulls game in Chicago last night! 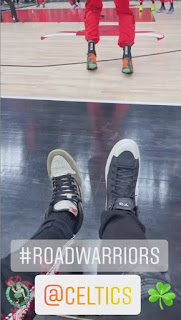 Video and photo above from Donnie Wahlberg on Instagram

Wahlburgers is now considered the "official" hamburger of the Boston Red Sox!

Speaking of Wahlburgers, if you live in or near Minnesota, Chef Paul Wahlberg will be making an appearance at the Maple Grove Wahlburgers today at 4:30!