The Boston Herald posted an article about Wahlburgers: 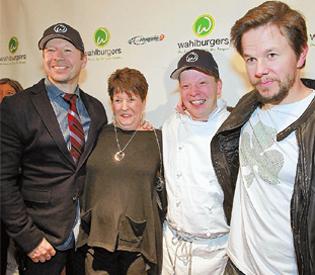 It was a family affair at the Hingham Shipyard last night where Hollywood sibs Mark and Donnie Wahlberg joined their chef bro, Paul, as they threw open the doors of their new burger joint, Wahlburgers.

“It’s a lot of fun and we’ve brought a lot of the old neighborhood with us,” said former Dot rat Donnie, who stars in CBS’ “Blue Bloods.”

“Obviously, we’ve had success with Alma Nove (the three boys’ upscale eatery across the street),” he said. “But this is something that is a little more fun and a little more of the spirit of the family. You can have a drink, some fries, a shake or a frappe. And the government cheese — just like we had as little kids.”

There was talk of a Wahlburgers reality show, but Mark reported that Paul is “apprehensive.”

“He’s a real working chef, he’s in the kitchen cooking,” said “The Fighter” tough guy. “This is my brother’s dream, and he’s obviously concerned with the idea of doing a reality show. Because when he hears ‘reality show’ he thinks ‘Jersey Shore.’

“But I think of it as a docudrama,” said the Tinseltown producer. “I think it is very compelling. It’s about someone trying to build a real business, and he’s very passionate, and nothing makes for better TV than that.

Now, Paul is starting to warm to the idea, said Marky, adding that they plan to shoot a “sizzle reel” soon and bring it to HBO, which has right of first refusal on Mark’s TV projects. If the cable network passes, they’ll continue to shop it.

Inside the 120-seat retro modern burger joint there’s a Wahl of Wahlbergs complete with childhood snaps of Alma’s nine kids, prom pics (!) and photos from the original NKOTB and Funky Bunch days. Now, that’s worth the price of admission ...

And speaking of Mark and “The Fighter,” it appears his falling out with director David O. Russell won’t put the kibosh on the star’s plans for a sequel.

He said the script is being written and he’d like to begin shooting by the end of next year.

“I’m not getting any younger,” he groused
Posted by NKOTB News at 6:48 AM