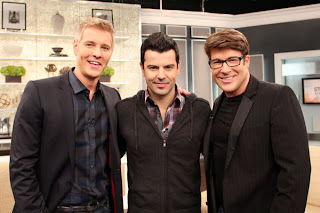 Jordan did an interview with Steven and Chris while backstage at their show today.

Q: What's your favourite song to cover?
Jordan says... "I did a cover of a Prince song called 'I Could Never Take the Place of Your Man,' and to me, it's a great cover because I didn't do it verbatim. The song was originally fast and kind of bouncy, and I switched it to a ballad. I made it my own, but you didn't lose the song—actually, I think the song was enhanced by what I did to it."

Q: What does it take to do a kick-ass cover song?
Jordan says... "Doing a cover is tricky, because you don't want to ruin it. If you pick a song that's already great, then the only place you can go from there is down. You almost want to choose a somewhat obscure song that might not be an incredible hit so you can do something different and interesting to it. It's a fine line: You don't want to insult the song by doing it over, but because it's a good song, you want to do it over."

Q: What's been your fave performance to date on Cover Me Canada?
Jordan says... "Whosarmy just did Paul Anka's 'Lonely Boy' on the show, and that was a classic example of to do a cover well. They switched the timing of it and made it their own but still maintained the emotion and spirit of the song. You could really feel the lyrics with what they did. I think if you do something interesting musically to a song, but the lyrics still come across, then that's the best marriage of technicality and emotion."

Q: What one word would you use to describe each of the remaining competitors?
Jordan says... "Whosarmy: professional. Ali Milner: organic. (She seems like she's a little shy, but that works for her, because you want to take a look behind the curtain and see who she really is.) Warren Dean Flandez: ambitious and hardworking. Melanie Morgan: solid."

Jordan revealed some other big news to S&C: Cover Me Canada is launching their ultimate superfan contest! One lucky winner will score a VIP trip to Toronto to watch the CMC finale in true rockstar style: They'll be hangin' tough with Jordan and the judges (not to mention the bands!) and receive backstage passes and access to the awesome after-party! For details on how to enter, stay tuned at cbc.ca/covermecanada.
Posted by NKOTB News at 5:21 PM