Joey is recording a new Christmas album! Here is an article from the Boston Herald about the Sense-ation gala, how Rhys is doing and what Joey has been up to. 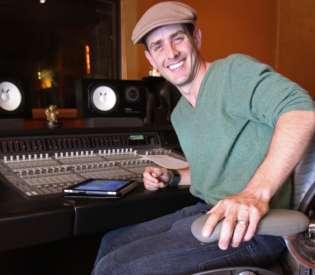 Turns out, not every child star grows up to be an adult train wreck. Exhibit A: Jamaica Plain homey Joe McIntyre, who shot to stardom at age 12 as the youngest member of New Kids on the Block.

Now pushing 40, Joey’s a husband and a dad, a successful actor — and he can still make the girls scream when he and the rest of NKOTB hit the stage with fellow boy-banders the Backstreet Boys. And tonight, Joe’s back home in Boston to help raise some dough for research and treatment for kids suffering from disorders affecting vision and hearing at the Mass. Eye and Ear Infirmary’s Sense-ation gala.

“This is a great event,” Joey Mac told the Track. “Last year we raised about a million dollars, which is unbelievable, and this year we expect to match it.”

Joey and wife Barrett’s 2-year-old son Rhys was born with severe hearing loss. But thanks to early diagnosis and treatment, dad says Rhys is doing “phenomenal.”

“If you hung out with him for a day you wouldn’t even think he suffers from hearing loss,” he said. “I just thank God for the amazing technology, the hearing aids and the work my wife does with Rhys and a speech therapist every week.”

Joe says the toddler, who wears hearing aids, “understands everything we tell him” and speaks like any other 2 year old.

“Today he’s pointing to his ear and saying, ‘What happened?’ My wife figured out that his ears popped on the plane. It’s all baby talk, but he’s talking and understanding everything.”

Rhys is the second of the McIntyres’ three kids — big bro Griffin is 4 and baby sis Kira is 4 months.

“Three’s the new 9,” laughed Joe, who has seven sisters and a brother. “It’s a ton of fun, and these kids are awesome and beautiful and it’s really what life is all about — amazing and thrilling and challenging and a lot of fun. I feel very, very blessed.”

Almost 30 years after he became a ’tween idol, McIntyre’s career is still going full throttle. This past Friday he had a guest stint on “CSI: NY,” and yesterday the New Kids announced the dates for their European tour with BSB. In November, he has a guest role in the USA series “Psych,” (He plays a cop who may or may not be a superhero.) He’s also got a part in the upcoming Garry Marshall romcom “New Year’s Eve” alongside a ton of Hollywood heavies including Robert De Niro, Ashton Kutcher, Sarah Jessica Parker, Jessica Biel and more.

“If you’re going to have a cameo in a movie, this is the one to have it in,” he laughed.

And in his spare time, Joey’s recording a Christmas album that will be out by Thanksgiving.

To purchase tickets to tonight’s Sense-ation gala at the Renaissance Hotel call (617) 573-3345 or email Sense_ation@meei.harvard.edu.