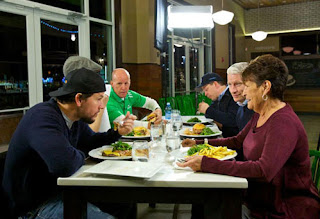 Mark Wahlberg will be on "Anderson" on Friday, and they are featuring Wahlburgers, so Donnie may be on some pre-taped portions of show as well.  There is a quick preview on Anderson Cooper's website.

Here is Jordan's response (on Twitter) to the interview Digital Spy published yesterday.

Here is a video clip from My Fox Boston about the Wahlburgers grand opening: