New Kids on the Block were back in their hometown of Boston for two shows Friday and Saturday night! 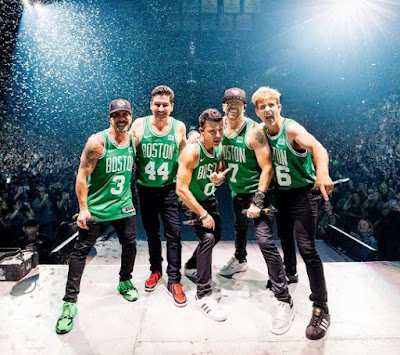 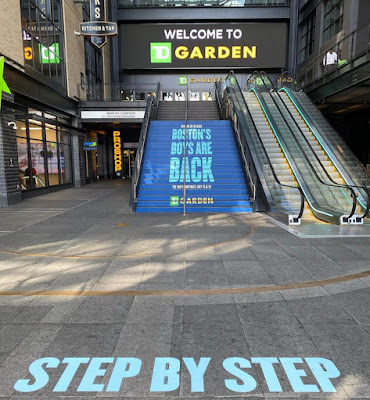 D-Nice made a brief appearance on stage at the second Boston show. Here are some backstage photos he shared on Instagram: 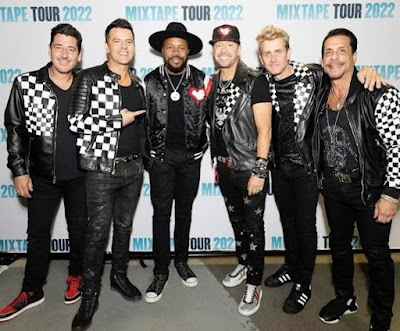 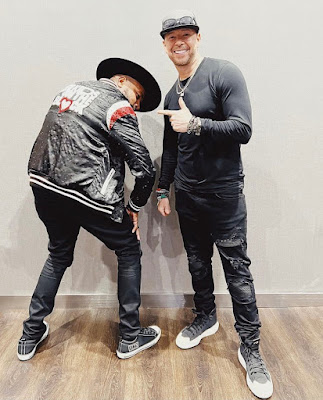 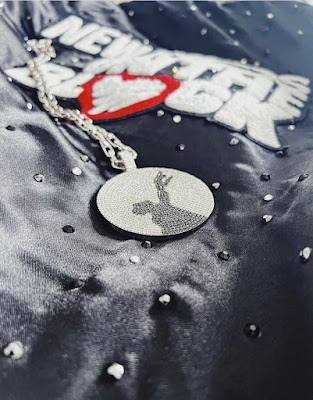 Here is the caption he included:

I got the right stuff! I’m at the @nkotb concert in Boston and received these beautiful gifts from the guys because of my virtual participation on their Mixtape tour. Blessed to know 5 good guys. Thanks @donniewahlberg, Jordan, Jon, Danny, and Joey. #CQ #BlockHeads

I don't see Donnie advertised as a guest for D-Nice's Carnegie Hall event on the announcement from his Instagram page, so Donnie might have just mentioned it because it's D-Nice's next CQ event. But, here's the info for that event if you're interested (tickets can be purchased here). 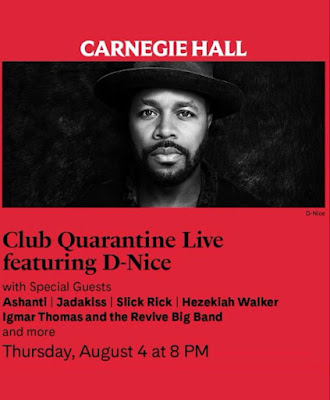 D-Nice and Donnie were also spotted in this photo from Patrick Petty: 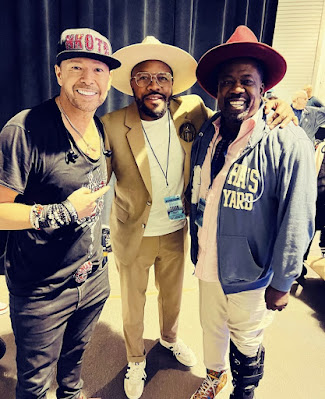 Joey shared a video from the TD Garden prior to the concert on Saturday! 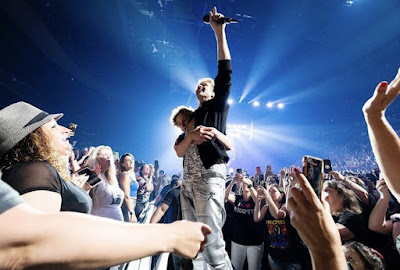 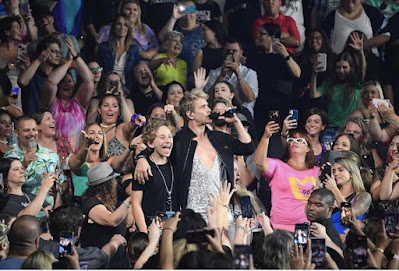 That’s my son Rhys hugging me tonight at @tdgarden. He gives the best hugs- just like #Boston. What an amazingly wonderful and uplifting weekend for all of us. We certainly are at this point all #FAMILY. Thank you thank you thank you.

Joey had a chance to get a bike ride in while he was in Boston (thanks to Jon!)

And Joey also shared his "namaste" moment from the Hatch Memorial Shell:
Danny was caught having some fun before a recent meet and greet!


Jonathan let us in on a little secret when filming Farmhouse Fixer: 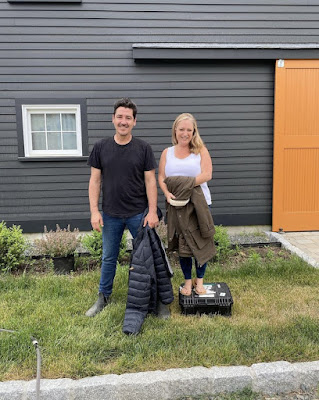 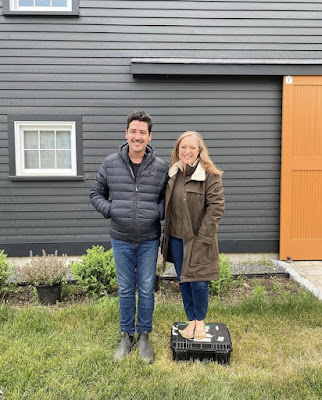 Sometimes we pretend it’s winter on the Farmhouse Fixer set!!!! See you tonight Boston #NKOTB #mixtapetour2022 #farmhousefixerhgtv
I saved some highlights from Donnie and Danny's IG stories over the weekend...
WCVB Channel 5 Boston interviewed some fans before the New Kids on the Block show on Friday night:

The Boston Globe posted a review on the show: 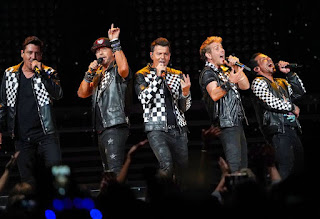 There was a point early in Friday’s stop on the Mixtape Tour where New Kids on the Block, the five-man vocal group anchoring these four-act bills, just stood still on the TD Garden stage, not talking, just surveying the frenzied crowd. The night was only about five songs into what would be a 2 1/2-plus-hour show. But confetti cannons had already been fired multiple times, and the audience was in the mood to shower Jonathan Knight, Jordan Knight, Joey McIntyre, Donnie Wahlberg, and Danny Wood — who came together in Boston nearly 40 years ago — with the sort of adulation that you’d see at the end of a night, not near its beginning.

Such is the relationship that the New Kids on the Block have with their fans since the 1986 release of their self-titled album, a record that would launch a late-1980s’ teenpop explosion that still has seismic effects in 2022. That freedom has allowed them to play with the structure of their shows, like this year’s edition of the Mixtape Tour, which also included British soul belter Rick Astley, hip-hop groundbreakers Salt-N-Pepa, and fiery R&B singers En Vogue. New Kids’ classic singles like the crushed-out synthpop-soul smash “You Got It (The Right Stuff)” and newer efforts like the better-with-age appreciation “Remix (I Like The)” were broken up with mini-sets by the other three acts, as well as snippets of cuts from the ‘80s and ‘90s that were both interpolated into the New Kids’ tracks and played as enticements for singing along.

The well-rounded bill had multiple songs that have retained their pop potency since their initial release. En Vogue’s harmonies are still arresting, as the introduction to their thumping debut single “Hold On” proved; Salt-N-Pepa remain playful and charming. (The underlying messages of En Vogue’s liberatory “Free Your Mind” and Salt-N-Pepa’s education-minded “Let’s Talk About Sex” still resonated, too.) Astley was dapper and self-deprecating, with his second set’s opening being framed as a Rickroll — the surprise appearance of his still-exquisite 1987 debut single “Never Gonna Give You Up,” which became an online joke in the late ‘00s that’s stuck around long enough to become a reminder of that track’s sublimity — by master prankster Wahlberg.

And then there were the New Kids, whose sets channeled both the wide-eyed charm of their early days and a grown-man streak that recalled the headier moments of the 2012 film “Magic Mike” and its sequel. They posed for selfies; they ran through the crowd; they even gave the show some local color with multiple shout-outs to different parts of the greater Boston area and an extended “Sweet Caroline” sing-along. The night ended with a boisterous run-through of the New Kids-fronted, tour lineup-assisted pep-up cut “Bring Back the Time,” and a final surprise — one last run-through of “Never Gonna Give You Up,” with the line “we’ve known each other for so long” having an added significance this time around.

Rhona from En Vogue posted this short video clip from Nebo, one of Donnie's favorite restaurants in Boston. Not sure who else was there, but she said Donnie bought everyone dinner:

Here are a few other clips from her (no New Kids featured, but always interesting to see what kind of stuff they probably also experienced backstage)...

William Hart from the Delfonics and one of the songwriters of the song "Didn’t I Blow Your Mind" passed away over the weekend. NKOTB paid tribute to him on their social media pages:

We are so saddened to learn of the passing of William Hart, the lead singer and founding member of the Delfonics as well as the writer and singer of one of our most beloved songs: the cover version of “Didn’t I Blow Your Mind”. Rest In Peace ❤️ 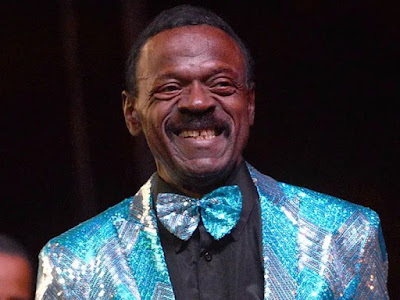 If you're in the Pittsburgh area today or tomorrow, Paul Wahlberg will be making an appearance at Wahlburgers!

If you’re in one of our #Pittsburgh locations you might bump into the one and only Chef Paul! He’ll be at the @MallatRobinson on Monday the 18th and @TheBlock on Tuesday the 19th. pic.twitter.com/YgGICpbyIe

Donnie posted a reminder about Very Scary People on Sunday, and he mentioned his "crazy #MixTapeTour, and now #BlueBloods season 13 schedules". So it looks like he might be pulling double duty during this last week of the tour? The guys have a day off tonight and he flew somewhere last night. Here is his "safe and sound on the ground" video: