Donnie, Jordan and Joey did a press conference in Chile today. Here is an article from Entretencion (translated into English). 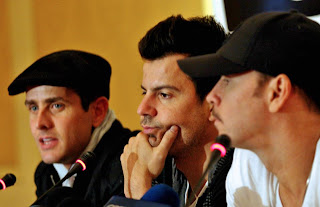 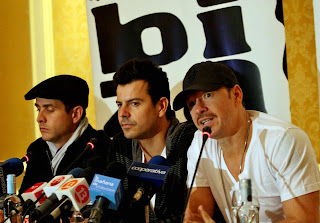 Photos courtesy of Tu Medio. There are some more photos here.

Three of the members of New Kids on the Block had a press conference where he admitted being very excited about his return to the country.

Just after 15:30 pm today, Donnie Wahlberg, Jordan Knight and Joey McIntyre, members of New Kids on the Block, entered one of the halls of the Ritz Hotel to give a press conference prior to Wednesday's concert at Movistar Arena.

"It was really beautiful and we are pleasantly surprised," launched Donnie Wahlberg, brother of Mark Wahlberg, the actor. "It's been so long since we came the first time, we did not know what to expect. But our fans waited and we are very grateful."

"We are very excited to play tomorrow," he said teammate Jordan Knight, one of the main faces of the group.

And the wait has not been lower. His last and only visit to the country was made in October 1990, when NKOTB was presented at the event organized by Amnesty International "From Chile ... an embrace of hope, "where they shared stage with bands like Sting, Peter Gabriel, Sinead O'Connor, Inti Illimani, among others.

"Personally, I value our first performance in Chile and insurance is one of the highest points of my career," confessed Wahlberg. "We were very honored that Amnesty International has invited us and we were very proud to be part of it (...) It was very different in a country where things were changing and people were much more hopeful. Was wonderful and then return that makes it much better. "

"We were quickly informed of what happened in that time, so we knew what had happened," Wahlberg said, referring to the dictatorship of Augusto Pinochet had recently. "We learned about the régimende Pinochet and all the atrocities that took place in the same stadium where we played. It was a wonderful learning experience."

On tomorrow's presentation, the artists forward their presentation is "a celebration of music and experience." "It was so fun back to this part of the world and you see the joy on all sides (...) We feel like children again and fans, but of course, we know that we are not, because we are all close to the 40 years now, "Wahlberg said, laughing.

"Obviously we will play our hits, and songs from our album of 2008 that of insurance known fanáticoas. Is a mixture of nostalgia ... but we are very young, like our fans, so at the end of the day is a party . People need to feel inspired and hope that our music makes you feel like that, "McIntyre admitted.

"We love the fans crazy!" Shouted excited Knight, while teammate Wahlberg said: "I think they are much better now. In addition, they can choose to go to see Jennifer Lopez tonight, or stay home on the Internet and despite all these years, they have elected to share your evening with us. It's great (...) The fans just want to feel joy and women of 35 years also need that joy, like the rest of the people " .

"We want to revive those feelings they had when young and have a good time," said Knight.
Posted by NKOTB News at 10:06 PM